La La Land to Get a “Clue” in February

The mystery has finally been solved: it was La La Land Records, on the Internet, with a batch of CDs. Well…in other words, it’s been confirmed that one of the label’s most hotly-anticipated releases is happening soon: the world-premiere release of John Morris’ score to Clue (1985).

Clue, of course, comes from a simpler time when movies based on board games and television shows weren’t the only ideas circulating throughout Hollywood. In fact, as high-concept films go, it was initially a box-office failure, only earning accolades when released on home video. (Chief among the laughs is the presence of no less than three endings for the film, each depicting a different culprit in the murder of Mr. Boddy.) There’s no reason to skip it, though; the ensemble cast (including Tim Curry, Christopher Lloyd, Madeline Kahn and Michael McKean) is a knockout, and the film boasts a very funny script from the pen of director Jonathan Lynn (who conceived the story with the equally funny John Landis).

A snappy comedy needs an equally snappy score, and Morris, best known for his scores to the films of Mel Brooks, delivers. This release has been on La La Land’s horizon since last year, and it’s their release for February 1. It will be limited to 3,000 copies and will feature nearly an hour of music (including 17 minutes of bonus tracks).

Keep it here next week when a pre-order link and track list are available. 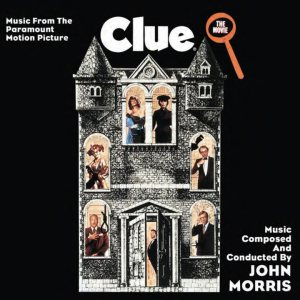