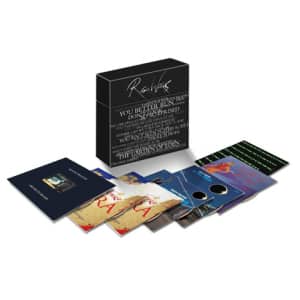 Roger Waters is bringing Pink Floyd's The Wall Live tour to Europe this spring, and to celebrate, Sony is reissuing a good amount of his work at an affordable price.

On March 28, the compilation Flickering Flame: The Solo Years Volume I (2002) will be repressed. This set collected the best of Waters' solo material from 1983 to what was then the present, with two unreleased demos added to the mix. Unfortunately, this disc has a rather unsavory legacy, as it was released with a rather extreme form of copy protection that prohibited it from playing on a PC or Mac (it was listed as such on the front sleeve). No online retailers' listings indicate if that condition has been removed for this new pressing - most seem to replicate the details of the original listing - but we can certainly hope otherwise!

Then, on April 4, Roger Waters: The Album Collection will be released. The eight-disc set will consist of The Pros and Cons of Hitch Hiking (1984), Radio K.A.O.S. (1987), Amused to Death (1992), In the Flesh - Live (2000) (presented as the two-CD/one-DVD version) and the two-disc, operatic Ça Ira (2005). While no new material will be provided, nor has there been any indication of new mastering, this pretty affordable set is the way to go if you've been thinking of diving headfirst into Waters' work.

The rundown of the track listings and pre-order links are below.