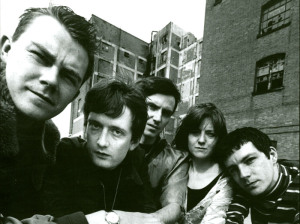 Yesterday's announcement of the lineup for the three-day Coachella Valley Music & Arts Festival in April was met with typical fanfare associated with major festival announcements. And why not? A veritable who's who of rising stars and legends across a wide swath of genres will be performing, including Radiohead, The Black Keys, Dr. Dre and Snoop Dogg, Bon Iver, Madness, Squeeze, The Shins, ex-Oasis frontman Noel Gallagher, the newly-reunited At the Drive-In, James, Florence and The Machine, Girl Talk and several dozen other excellent acts.

Another major name on the bill: Pulp, beloved Britpop outfit, who recently reunited last year to perform a clutch of festival dates in Europe. Their Coachella set is their first major performance of the year, and a great sign to all who were awaiting their moves for the new year. But not only are Jarvis Cocker and company hitting the road, they're revisiting their early catalogue next month with reissues of their first three albums on the Fire Records label.

Before Cocker and band were gathered into the burgeoning Britpop scene in the mid-'90s, alongside guitar-heavy bands like Oasis, Blur and Radiohead, they had spent a tempestuous decade signed to Fire, discouraged by the lack of solidarity with their label and absence of commercial success. (The band's personal nadir may have been the dark and dreary Freaks, recorded in one week in 1987, after which the band nearly split.) Eventually, the single "My Legendary Girlfriend" gained some press attention in 1991, and the eventual move up to the majors with the release of His 'n' Hers (1994) on Island Records was their major commercial breakthrough.

Fire's forthcoming expansions of It (1984), Freaks and Separations (1991) include a host of non-LP singles and B-sides (in the case of Freaks, the bonus material takes up an entire extra disc). In addition, It and Separations include previously unreleased material.

Each reissue will be available in the U.K. on February 13. Hit the jump to check out the track lists!