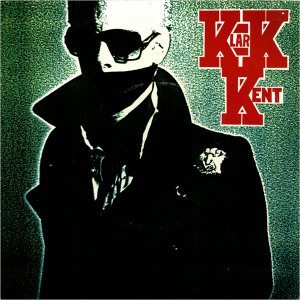 We’re sure readers of The Second Disc are relaxing after what was surely a delightful Fourth of July. (I know I am.) But if you’ve managed to pry yourself away from your back porch or grill and have a look at our humble catalogue compendium, allow yourself to consider – in honor of our country’s independence – a true American musician. One who, in his musical travels, fought for truth, justice and the American way. He may not have been exactly as he seemed, but his work is worth the appreciation even today.

I’m of course referring to Klark Kent. Far from being Superman’s alter-ego, though, this Kent was the alter-ego of another super man – one Stewart Copeland, drummer for The Police.

To hear Copeland tell the tongue-in-cheek story, Kent was a musician with otherworldly skill, who could play all the instruments needed for true rock action. His biting lyrical content was some of the most thought-provoking commentary of all time, and it should come as no surprise that record labels wanted his skills. But only A&M Records got the goods on Klark Kent, and allegedly had to do so by signing this other act, The Police. While “Roxanne” and “So Lonely” struggled up the charts, Kent also had a charting single, the hard-driving “Don’t Care,” which made it up to No. 48 on the U.K. charts. Kent and his touring ensemble even had a spot on Top of the Pops in 1978; Kent wore the finest shades and silver makeup, while his bandmates and manager played while wearing masks. (Beyond the masks, the band bears striking physical resemblance to fellow Police-men Sting and Andy Summers, as well as the band’s loud road manager, Kim Turner.)

Another KK single in ’78 was followed two years later by an eight-track, 10-inch EP. It never made any chart, but for obsessives, it was one of the missing links in The Police’s story. (Copeland did indeed play all the instruments on the record, and his influence on The Police’s sound is most evident on this material.) In 1995, I.R.S. Records (founded by Stewart’s older brother Miles) finally made the Klark Kent katalogue available on CD, including all the EP and single material with a few unearthed tracks. But that disc went out of print ridiculously fast, and commands ridiculous prices on the secondary market.

Perhaps someday, a Hip-O Select-type organization might loose Klark Kent’s kinetic kraziness to the public once more. Until then, check out this Reissue Theory-style look at the other side of intriguing American Stewart Copeland, after the jump.Klark Kent, Music Madness from the Kinetic Kid (1978-1980)