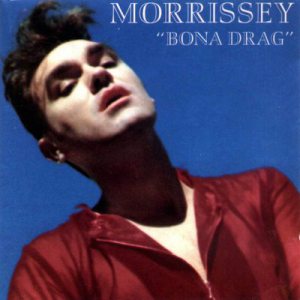 From beloved, semi-official Morrissey Web site True to You comes the news that Morrissey's singles compilation Bona Drag (1990) is getting a deluxe reissue for its 20th anniversary with six unreleased vault tracks.

Released between Moz's solo debut in 1988 and Kill Uncle in 1991, Bona Drag included some of the ex-Smiths frontman's best early work, including "Suedehead," "Everyday is Like Sunday," "The Last of the Famous International Playboys" and "Disappointed." Six bonus tracks from the the Viva Hate sessions and beyond will be added to the EMI-reissued, Morrissey-approved package, as well as new cover art and rare photos (the LP sleeve, a still from the video for "November Spawned a Monster," re-colored Morrissey's shirt from black to red, as seen above, and will now go back to black for this reissue).

The set is due out in the U.K. on September 27 on Major Minor Records, the same vintage label from the '60s that had The Dubliners and Johnny Nash which Mozzer looks to be restarting for this set. Come, Armageddon, come after the jump.

Track 15 is an outtake from the "Everyday is Like Sunday" sessions
Tracks 16-17 are outtakes from the Viva Hate sessions. Track 17 was written by Morrissey for Sandie Shaw and appeared on her Hello Angel LP (Rough Trade, 1988)
Tracks 18-19 are outtakes from the Bona Drag sessions. Track 19 is an early version of "At Amber," the B-side to "Piccadilly Palare."
Original version of Track 20 was the B-side to U.S.-only single "Tomorrow" (Sire/Reprise, 1992)