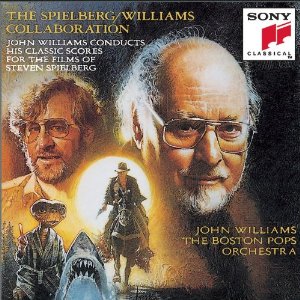 Another volume of Spielberg-Williams joy by The Boston Pops, this disc is a great companion piece to The Spielberg/Williams Collaboration, including new arrangements of cues from the films not included on the last disc as well as different cues from some of the best collaborations (Raiders, E.T. and 1941). There's no overlap from the last disc, and the performances are just as airtight, so you can't miss with either of these.

After Schindler, Spielberg took a much-deserved break from directing (although he used much of his free time building the Dreamworks studio with partners Jeffrey Katzenberg and David Geffen - the largest Hollywood film company to be built in some four decades). He returned with some familiar territory: a hotly-anticipated sequel to Jurassic Park. Unfortunately, The Lost World lacked the charm of its predecessor (indeed, this author would rank the film as the worst Spielberg ever directed), and the new themes did not sink in as the original JP motifs did - and those themes are mostly relegated toward the end of the film, an unfortunate case of "too little, too late."

Amistad seems to score no points in history other than being the first film that Spielberg directed for DreamWorks - but don't let that lack of distinction fool you. It's a finely-executed (if a little rote) historical drama about the slave mutiny aboard the ship La Amistad in 1839 and the trial that followed. The performances are tremendous (from such actors as Djimon Hounsou, Morgan Freeman, Matthew McConaughey and Anthony Hopkins), and the score - which sees Williams incorporating traditional African choruses and instruments into the orchestra - is an underrated composition and favorite when Williams performs live.

Somehow, critics are quick to point out the waves of sentimentality in Spielberg films, particularly when they deal with subjects close to his heart. His deep Jewish background was seen by some of the most out-of-touch critics as a stumbling block for Schindler's List, and his high respect for our nation's veterans (his father served in World War II) was seen by some as a means to sensationalize the WWII drama Saving Private Ryan. Of course, those critics are wrong: the film is as harrowing as they come - perhaps no more horrifying and realistic depiction of a battlefield than the opening sequence on D-Day - and the film avoids the perfect happy endings that are often associated with Spielberg's career. (That it lost a Best Picture Oscar to a much more sentimental WWII picture, Life is Beautiful, is even more intriguing.)

For the film, Williams composed a score full of respect and restraint. The voices of the Tanglewood Festival Chorus on the main theme, "Hymn to the Fallen," sweeten a theme that manages to mourn and celebrate some of the purest heroes our country ever created. It was one of many films in the wake of Schindler's List that deserved to put a still-elusive sixth Oscar on the Maestro's shelf.

One of the least-seen entries in the Spielberg canon, this 18-minute short, created by Spielberg for America's millennium celebration, features a short, stirring score by Williams that nicely fits the tributes to industry, ingenuity and patriotism that the director put together. The score was released on CD some years later with a slew of bonuses, including Williams' themes for the 1996 and 2002 Olympics, a post-9/11 tribute to New York incorporating the music of Leonard Bernstein and a concert arrangement of "The Mission," best known as the theme to the NBC Nightly News.

It's one of the darkest, most complex Spielberg films ever; whether that's the mark of its late creator, Stanley Kubrick, is a matter of debate. But A.I., the story of a robot boy's quest to become human, is the kind of fairy tale anyone could expect from Spielberg. It's that eerie touch that keeps critics debating it years after the fact. Williams contributes to the longing atmosphere of the film, thanks to a theme that has the rare distinction of featuring some vocalists, in this case being Lara Fabian and, in one of his first appearances on record, Josh Groban.

Easily the best Spielberg film of the 2000s, this adaptation of a Philip K. Dick story found Tom Hanks as a "Precrime" cop in Washington D.C. in 2054, who uses a team of psychics to catch murderers before their crimes are committed. The latest murderer named is his own, and he strives to clear his name at any cost. The noir overtones of the film combined with the application of it-could-happen future technology make this a consistently watchable film. It's odd, then, that there's not much to say about the score. It's one of the few Spielberg-Williams collaborations that resulted in little more than musical wallpaper - although this easily could have been because Williams devoted more creative energy to Catch Me If You Can plus another Star Wars score and the overseeing of the music to Harry Potter and the Chamber of Secrets.

The second year fans got two Spielberg-Williams soundtracks was another great one. This fact-based caper about a world-class check forger (now one of the world's leading experts against check fraud) was bolstered by a snappy, jazzy score that called to mind some of Williams' earliest work (back when he was still called "Johnny"). Driven by a woodwind-heavy chase theme and a mournful saxophone-centered motif for Frank Abagnale and his father (played to Oscar-nominated perfection by Christopher Walken), the CIMYC score marked yet another nomination for the composer. Interestingly, this is the only Spielberg-Williams soundtrack in which the score shares CD space with any kind of pop songs (the film, set in the '60s, featured classics like Judy Garland's take on "Embraceable You," Frank Sinatra's immortal "Come Fly with Me" and "The Christmas Song," sung to perfection by Nat "King" Cole).

The Terminal was another Spielberg dramedy based on surprisingly true events - in this case, a man who was tied up in diplomatic trifles so deep that he made the airport he was stuck in his home - and it also starred go-to everyman Tom Hanks (who had played the antagonist in Catch Me). With so many similarities to their last film, it's no surprise that Williams wrote a very similar score to his last collaboration with Spielberg, albeit with some twists (the jazz motifs are more plot-driven than setting-oriented, and Hanks' Eastern European character gets a more ethnic theme than what Williams usually writes for protagonists). In both filmed content and musical themes, The Terminal is an often-overlooked but thoroughly satisfying entry in the oeuvres of both men.

What you probably don't remember about War of the Worlds is that its one of the best Spielberg films of the last decade, one that pulls together all of the director's classic devices - big set pieces, frenetic action, tender familial bonds - and turns it into one of the most shocking retellings of H.G. Wells' classic sci-fi story (one colored heavily by the paranoia of the post-9/11 age). You probably don't remember any of that, because its star, Tom Cruise (who made a great contribution to the success of the film), decided to go batshit insane during the promotion of the film, arguing with actress Brooke Shields over Scientology and leaping on Oprah Winfrey's couch to declare his love for Katie Holmes, whom he later married. But do yourself a favor and rewatch the film, because you might be missing out. What you won't be missing out on, unfortunately, is the music, one of the rare instances of musical wallpaper from Williams. (To be fair, he wrote four scores that year; on the other hand, only one of them - the music to the last Star Wars film - was memorable.)

Music from the Films of Steven Spielberg (Silva Screen, 2005)

This double-disc compilation from the European film score label actually showcases music from other Spielberg film composers as well as Williams, including Quincy Jones (The Color Purple), Jerry Goldsmith (who composed the score to Poltergeist, a film that Spielberg produced but did not direct, despite rumors to the contrary) and Billy Goldenberg (composer of Duel). And that makes it interesting. What makes it less interesting is that The City of Prague Philharmonic Orchestra can be a bit sloppy on some of these performances (many of which come from a four-disc compilation of Williams' work that the label released two years prior). For every good performance (the proper end credits suite of Temple of Doom) there's a wickedly bad one (the suite from E.T. is plodding and full of performance errors). For the curious fan only.

Spielberg's venture back into serious territory took him to the aftermath of the 1972 Olympics, where 11 Israeli athletes were murdered, and the Israeli government's violent response. Though the film was heavily controversial, Spielberg's direction was impeccable (it's arguably one of his least sentimental films) and the film was given deserved acclaim. Williams' score was part of that acclaim, although the Oscar and Grammy-nominated soundtrack was lost in the shuffle of his other films that year.

After viewers swallowed the bitter pill that was Munich, Spielberg gave them a heavy dose of sugar in the form of another Indiana Jones movie. Years in development, the film found Harrison Ford in fine form as the adventurous hero, now older but no weaker. However, the implausible script and dopey set pieces left audiences and critics feeling more like they had seen one of the Star Wars prequels and not an action film in the Raiders mold. Williams put together a great score that retained the classic main theme while adding some great new adventure motifs. But the soundtrack, though nearly the length of the entire CD, managed to include the most boring parts of the score (whole set pieces, like the fantastic chase scene in the warehouse and several large pieces from the jungle pursuit scenes, remain unreleased.) For Spielberg and Williams, the score acted as a good stopgap until fresher things happen for the both of them.