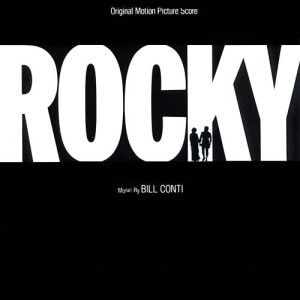 Today saw the release of the widely-hyped The Expendables, in which Sylvester Stallone gathered as many action movie heroes, past and present, and shoved them all into a film. By all accounts, it doesn't seem to have worked as well as it could have. And that's more or less latter-day Stallone for you. (Seriously, have you seen Rambo?)

With that in mind, this week's Friday Feature takes you to a simpler time. A time where Stallone was a young actor with a dream, which he turned into a beautifully metaphoric script. That's right: Rocky, the feature film Stallone wrote and starred in, as million-to-one boxer Rocky Balboa. The story spawned five sequels and became one of the most popular film scores in history, thanks to Bill Conti's upbeat, infinitely inspirational theme, "Gonna Fly Now," not to mention a few other testosterone-fueled tunes along the way.

Lace up your running shoes and run up the steps to the halls of Rocky music after the jump.

The original score was simple enough: a single LP of Conti's heroic music. The composer had done nothing terribly high-profile before being assigned to this picture, so you could say his journey mirrors Balboa's own against the champion Apollo Creed in the film.

The theme with the B-side "Reflections" was released as a single (United Artists UA-XW940-Y, 1977). A cover version by trumpeter Maynard Ferguson was also a Top 40 hit alongside the chart-topping original, proving just how strong the music had gripped the country.

For the second installment of the film, in which Balboa again is matched up against Creed, Conti composed some new themes, notably main theme "Redemption" and love theme "All of My Life."

"Redemption" and "All of My Life (Reprise)" were released as a single (United Artists UA-X1305-Y, 1979), which failed to emulate the success of "Gonna Fly Now."

Rocky III gave Balboa, now heavyweight champ, a hungry new opponent: James "Clubber" Lang (played by breakout '80s icon Mr. T). Likewise, the soundtrack format was given a makeover, too: Conti's new score cues mixed with old ones ("Gonna Fly Now," "Reflection" and "Conquest" are straight from the first two soundtracks), as well as songs performed by Sly's brother Frank Stallone (including the undying "Take You Back," sung by Frank Stallone on a street corner in about half of the series). But it was "Eye of the Tiger" by up-and-coming rock band Survivor that was the massive hit the franchise needed; it was the top song of the summer of 1982, earning a Grammy and an Oscar nod in the process.

Conti was not available to score Rocky IV, and Vince DiCola stepped in to take his place. DiCola had worked on the soundtrack to Staying Alive (1983), which Stallone had directed, and used this soundtrack as a stepping stone to his most iconic work, the score to 1985's The Transformers: The Movie. DiCola's score was under-utilized in favor of pop hits (as was the norm by then), but there were many chart hits in that category: Survivor's "Burning Heart" reached No. 2 on the Billboard charts, James Brown scored a killer comeback with "Living in America" (No. 4) and the Top 40 "No Easy Way Out." That's not to say that DiCola's music is bad; quite the contrary, his upbeat, synth-and-orchestra cues remain some of the most upbeat workout music in film history.

This soundtrack is also the only one to have been expanded on CD: in 2006, a reissue (Volcano/Legacy 8287 75989 2) included an alternate remix of "The Sweetest Victory" and included "Man Against the World" from the Survivor album When Seconds Count (1986), which was written for the film but not used. (And of course there's that great unlimited score release from Intrada earlier this year, which you can read about here.)

Is it any surprise that the worst Rocky film got the worst soundtrack ever? Bill Conti came back to score, but the album was all about terrible, obscure or terrible and obscure rap acts (save for the truly wayward "The Measure of a Man" by Elton John, written with Alan Menken of Disney score fame).

The next year saw a compilation, The Rocky Story (Volcano 32000-2, 1990), which basically was an abbreviated Rocky IV soundtrack with "Gonna Fly Now" thrown in. Far more interesting was Rocky Balboa: The Best of Rocky (Capitol 9463-76267-2-6, 2006), arguably the closest anyone got to an actual Rocky Balboa soundtrack. Tracks from all six films were utilized, including a new remix of "Gonna Fly Now" and the track "It's a Fight" by rap group Three 6 Mafia.

Believe it or not, all the albums described above seem to still be in print, too - talk about going the distance!