Every August 29, incredible geeks like myself look skyward and emit sighs of relief that no nuclear warheads are heading our way.

Of course, on a fictitious August 29 - in 1997 to be exact - a nuclear attack did indeed happen, triggered by a dangerously self-aware defense network system called Skynet. A war would rage between these sentient machines and their human creators, ultimately climaxing with soldiers on each side being sent to the past (our present) to alter future events. That tale, with the help of an Austrian bodybuilder and a visionary director, formed the crux of the long-running Terminator franchise.

Released in 1984, the low-budget The Terminator was a surprise critical and commercial hit with a smartly-written script. No single film of the '80s more astutely captured the natural fears of advancing technology and nuclear proliferation in one fell swoop (all of director James Cameron's millions of dollars can't make Avatar better than this one), and the story was anchored by an improbable, star-crossed love between a human freedom fighter from the future and the young woman he is tasked to protect, whose future offspring will lead the humans to victory. But it's the relatively-untested acting prowess of Arnold Schwarzenegger, as the villainous title character, that steals the film. His mostly silent, incredibly fearsome performance made Yul Brenner's evil robot cowboy in Westworld look like James Stewart, and it turned Schwarzenegger into a marquee name.

One of the most underrated aspects of the early entries in the series was the film's score. Cameron hired Brad Fiedel, a one-time keyboardist for Hall and Oates, to compose the soundtrack, which he did almost entirely through keyboards. Such a tactic was not entirely in vogue at the time, and perhaps nobody did it better on film than Fiedel. His incredibly catchy theme captured the idea of heroism against interminable odds throughout the franchise, and was punctuated by an off-the-wall series of percussive ideas (namely the five-hit drum sequence that would be used long after Fiedel left the franchise).

Of course, Fiedel was not the only composer to work on the series; the Terminator franchise has bounced between studios and producers a ridiculous amount of times in the past 26 years, so the musical legacy of the series is more of a potluck than a multi-course meal. Read on about the release history of the Terminator scores after the jump. 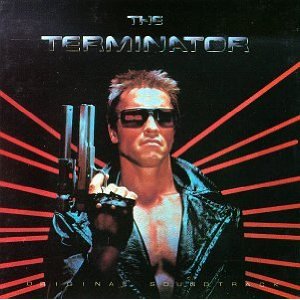 The original LP featured one side of Fiedel's score snippets and another side of the rather unusual pop songs heard as source cues in the first half of the film. In some ways, Fiedel's music succeeds even better on the album, since the original film was mixed only in mono and thus hid some of the more unusual, stereo-panned effects throughout the score. On the other hand, some have stated that the score loses much of its context without a film to back it up.

Those New Wave tunes are incredibly repetitive, although many of the people principally involved ended up doing other surprisingly notable things. Tahnee Cain, an actress/singer, enjoyed a turn (under stage name Tane McClure) as Reese Witherspoon's mother in the Legally Blonde films. Lin Van Hek became a respected writer and clothing designer in her native Australia. Jay Ferguson (who'd previously had a Top 10 hit in 1978 with the song "Thunder Island") became a composer for television, most notably the theme to the American adaptation of The Office.

The original soundtrack was released on CD in the years after the release of The Terminator, and is now an oft-sought after collector's item. 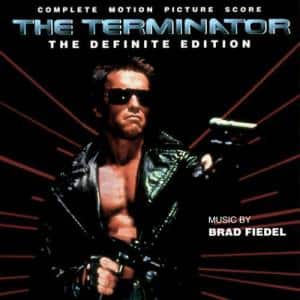 For the 10th anniversary of the film, the complete score was finally released by the German label Edel. While it may not have been the most high-end release (the subtitle "The Definite Edition," present on some copies of the disc, has often been assumed to be a typo), it was a great-sounding release (and proof positive that Fiedel's Terminator score was more than just synthesizer noodling). It, too, is out of print and fetches considerable prices on the secondary market. 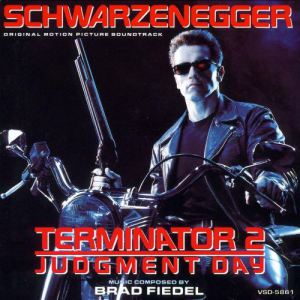 By 1991, when Terminator 2: Judgment Day was released, Cameron and Schwarzenegger had become household names in the blockbuster action genre, the director having helmed Aliens (the 1986 sequel to Ridley Scott's 1979 sci-fi/horror film, now an immense franchise) and The Abyss (1989). The actor, meanwhile, had become one of the most bankable stars in Hollywood, be it action (Commando (1985), Predator (1987), The Running Man (1987)) or even comedy (Twins (1988), Kindergarten Cop (1990)). But one thing was sure: Arnold had left his days as a villain behind him, and T2 had to reflect that. Arnold played the same model Terminator, but reprogrammed to fight for humanity. (Fun fact: both iterations of the Terminator character made the American Film Institute's list of the greatest heroes and villains - the only character to appear on both!) This time he's sent back to protect the now preadolescent John Connor (Edward Furlong) from a new killer cyborg, the liquid-metal T-1000 (Robert Patrick).One of those rare sequels that can stand aside the original, T2 packed bigger action, bigger effects (the T-1000 was one of the first effective computer-generated effects in film history) and a bigger (yet no less electronic) score from Fiedel's capable keyboards.

Also released in the T2 promotional blitz was "You Could Be Mine," a song from Guns N' Roses' then-upcoming Use Your Illusion I & II albums. The song was utilized after an accidental bit of GN'R symbolism was captured on film (Arnold unveils his signature shotgun from a box of long-stemmed roses - ha!), and the single (Geffen GES 19039) became part of the whole T2 package. Schwarzenegger even starred in the video for the track, which became a Top 30 hit.

The soundtrack, recently out of print, was given a straight reissue by British label Silva Screen last month. Unfortunately, neither Canal+ (owner of the rights to T2) nor Fiedel could locate any of the master recordings for an expansion, so a remaster was all that could be done for the time being. (That information was obtained at the bottom of this thread at Film Score Monthly.)

After years of development and a change in distributor, Terminator 3: Rise of the Machines was released in 2003. Again, Schwarzenegger returned to protect John Connor (Nick Stahl) and future wife Kate Brewster (Claire Danes) from another malicious Terminator, the T-X (Kristanna Loken). Despite some more enormous set pieces - this film's truck chase was nearly as good as the last film's - T3 served better as a commercial for Schwarzenegger's successful campaign for governor of California. The film score went in a completely different direction as well; Marco Beltrami, best known for composing the scores to the Scream trilogy, contributed an orchestral score that relegated the original Terminator theme to the end credits in favor of themes that sounded like lesser versions of the originals.

Perhaps the best non-Fiedel score in the series was Bear McCreary's score to Terminator: The Sarah Connor Chronicles. The uneven but usually entertaining show, set as an alternate sequel of sorts to T2, had Sarah and John Connor protected by a mysterious new model cyborg named Cameron (played by Summer Glau of Firefly fame). It ran for two full seasons and featured a rather impressive score by McCreary, who kept part of the theme in the opening credits sequence. (The most impressive tune may have been the traditional "Samson and Delilah," sung by Garbage frontwoman Shirley Manson, who had a recurring role as another Terminator in the second season.) 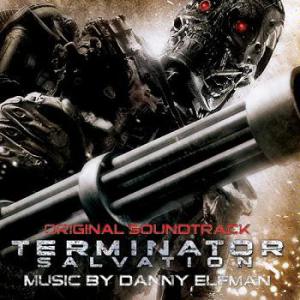 Just as Sarah Connor went off the air, Warner released another sequel, this time set during the future war and starring Christian Bale as John Connor. Unfortunately, this was easily the worst of the series, thanks to the terrible direction of McG (the mononymous director behind the Charlie's Angels films), the unconvincing storyline, the terribly over-the-top performance by Bale (who showed the same tics onscreen as Batman, which threatened to trivialize the otherwise perfect The Dark Knight in 2008) and the general lack of Schwarzenegger (save for one vaguely impressive digital effect). Add to that a much-publicized on-set fight between Bale and the cinematographer of the film (incredibly NSFW audio here) and you've got quite the muddle.

The score didn't help things either; respected composer Danny Elfman gave one of the most generic scores of his career, lacking not only Fiedel's original themes but any theme of note.

As of now, the franchise is stuck in yet another rut, with the production company behind Salvation in bankruptcy and the rights being purchased by a hedge fund with intentions to re-sell the franchise rights. (The hedge fund, Pacificor, recently began to thwart attempts to produce an animated Terminator film.) Even this fan of the series thinks the time might be now to say "Hasta la vista, baby" to the saga.