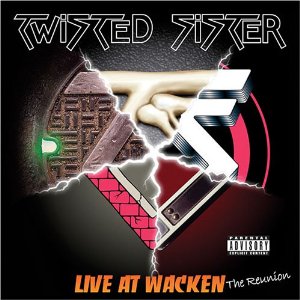 As rock fans sit about and wonder if and when the Twisted Sister discography is ever going to be remastered and expanded in full, Eagle Rock Entertainment attempts to satiate TS fans' appetites by reissuing Live at Wacken: The Reunion (2006).

Recorded at the Wacken Open Air Festival in 2003, the set was one of the biggest venues Dee Snider, Eddie Ojeda, Jay Jay French, Mark Mendoza and A.J. Pero had performed at since intermittently reuniting the seminal '80s glam metal band with all of its classic members in 2001. It was filmed in full and released by Eagle Rock in 2006 on a hybrid CD/DVD set that featured not only the Wacken performance but interviews with the band and bonus live audio from the band's early club years in 1980 and 1982.

Eagle Rock will reissue the set on two discs (a separate CD and DVD) on October 26 - a nice addition of "shock" to your required dose of rock this Halloween. Additionally, they're also prepping straight reissues of the band's last two albums, Come Out and Play (1985) (which features mind-bending guest appearances by Don Dokken, Alice Cooper, Brian Setzer, Clarence Clemons of The E Street Band and Billy Joel) and Love is for Suckers (1987), technically a Dee Snider solo album without contributions from the rest of the band but released under the TS name.

Read the full press release for Live at Wacken here and hit the jump to view the specs for all three titles.