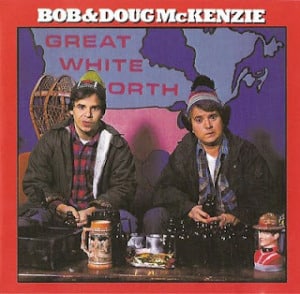 Welcome to another installment of Reissue Theory, where we reflect on well-known albums of the past and the reissues they could someday see. Today's focus is on two hosers from the Great White North and the strangely funny musical legacy they left behind.

The first flurries of the new winter stuck to the lawn outside The Second Disc HQ yesterday. Inevitably, we're going to need something to warm us up into the holiday season and the bitterest cold months of 2011. Sweaters? Check. Tuques? Check. Beer? Check.

Well, that's not everyone's recipe for warmth, but it'd do for the likes of Bob and Doug McKenzie, the lovable hosers on sketch show SCTV in the early 1980s. The dopey duo, played by Rick Moranis and Dave Thomas, were among the first runaway successes of late-20th-century North American sketch comedies, not only on television but in film and - yes - on record. After the jump, take a look at the history of the McKenzies and the albums they recorded. Good day, eh?

The creation of the McKenzie brothers began with a bizarre request: the Canadian Broadcasting Company requested in 1980 that the cast and crew of the show - at the time in its third season - add a "distinctively Canadian" bit of programming to the mix. Two bemused cast members, original member Thomas and newer member Moranis, complied and threw together as many Canuck cliches as possible. Bob and Doug McKenzie covered a wide variety of topics including beer, back bacon, donut shops, beer, smokes, winter wear and beer. Like all hilarious comedy sketches, it's best in small doses, although there was one installment of the "Kanadian Korner" (as it was first called) for each episode in SCTV's 1981 season.

Though they were intended as fillers for the Canadian broadcast, the bits began finding their way into SCTV's U.S. broadcasts on NBC. Thus began a wave of popularity for the duo, which unintentionally set the tone for most Canadian-themed humor in the decades since. (You've probably heard enough Canadian references ending in "eh?" for three lifetimes.) Not all was rosy with the rest of the cast as far as "The Great White North" was concerned. While most of the clips were improvised between Moranis and Thomas, cast members began to grouse that Thomas, the head writer, was using his influence to further push Bob and Doug into the spotlight. Some actually left for that reason, beginning the show's eventual disintegration. (Before the show ended, however, Moranis and Thomas devoted a 1982 episode to the McKenzies getting their own special - which promptly flopped.)

But Bob and Doug remained notable faces long after SCTV went off the air. Moranis and Thomas reprised the role occasionally in commercials and other films (including the Disney animated film Brother Bear and a 2009 online series produced by both actors but featuring fellow Canuck Dave Coulier in place of Moranis), and the duo's Two-Four Anniversary was chronicled in a CBC documentary in 2007. Both actors have come around to recognize the McKenzies - for better or worse - as the characters that kick-started their careers as high-profile comedians.

There were two McKenzie LPs released during the wave of McKenzie-mania. The first, The Great White North, is easily the best, featuring some fun liner notes including pre-written answers to the 13th track, "You Are Our Guest." There were two notable hits, even: "Take Off" was a U.S. Top 20 hit with guest vocals from (who else?) Geddy Lee of Rush, and a Canuck-themed take on "The Twelve Days of Christmas." The disc is, interestingly, still in print on both CD and with digital retailers.

The follow-up album was one of the last nails in the McKenzie coffin: the soundtrack to Strange Brew, a 1983 film featuring the McKenzies uncovering a conspiracy at their local beer brewery. It's a cult classic, to be sure, but easily as successful as your average film based on a Saturday Night Live sketch. The LP, which is out of print, was a distillation of the film - some of it taken directly from the film, complete with underscore by Charles Fox. Fox, of course, worked on several great film themes including "Ready to Take a Chance Again" by Barry Manilow from Foul Play (1978) and the title track from 9 to 5 (1980), as sung by Dolly Parton. This LP has never been released on CD, nor has any of the score been released on its own. But one can always hope, eh?