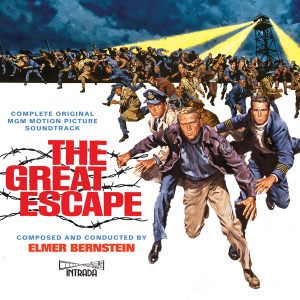 Intrada's first releases of the new year are two big name scores sure to please a few generations' worth of film music fans.

First up is the world premiere release of James Horner's score to 48 Hrs., the 1982 buddy cop comedy starring Nick Nolte and Eddie Murphy in one of his first major motion picture roles. This disc features Horner's complete score (one of his earliest successes of the '80s), plus three tracks by The Busboys (including end credits tune "The Boys Are Back in Town") and one source cue by another favorite composer, Ira Newborn. It's a limited set with a high unit count of 5,000.

The label's other big title is a heavy-duty reissue of Elmer Bernstein's score to the Steve McQueen classic The Great Escape (1963). This three(!) disc set includes two CDs of the original motion picture score (cleaned up from several previous reissues on the Rykodisc and Varese labels) and the original re-recorded score LP, also conducted by Bernstein. This set is happily part of Intrada's MAF line of unlimited releases - and it's a steal at $19.99.

Order each set here and here, and get the track listings after the jump.