"Stop" the Presses! Classic Hollies on the Way 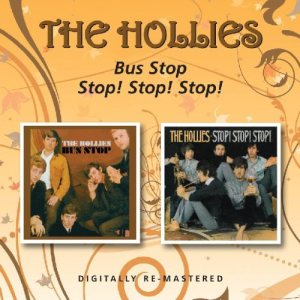 Before discovering his golden vocal blend with David Crosby and Stephen Stills, Graham Nash made sweet music with Allan Clarke as a member of The Hollies. With a core lineup of Nash, Clarke, Tony Hicks and Bobby Elliott (with bassist Eric Haydock replaced by Bernie Calvert in 1966), The Hollies possessed arguably the finest harmonies of any British Invasion act, and the band was finally rewarded with a coveted spot in the Rock and Roll Hall of Fame in 2010.

Like The Beatles, The Rolling Stones and most of their other British compatriots, The Hollies found their original U.K. LPs retooled for American release. While the band’s U.K. catalogue is well-represented on CD, most of the related U.S. albums have been overlooked. In 2010, Sundazed Music released The Hollies’ first two American albums on Imperial Records in mono on vinyl only (c'mon, guys, how about a CD release too?); somewhat ironically, it’s the U.K.’s BGO label delivering the group’s fourth and fifth Imperial albums, both from 1966, on a “two-fer” CD. The combined Bus Stop and Stop! Stop! Stop! streets on February 7.

Bus Stop is one of the few American albums by The Hollies to have no British counterpart. The title track, written by 10cc’s Graham Gouldman, hit No. 5 on the American singles chart, having peaked at No. 2 abroad. (The Hollies’ American success didn’t happen overnight; while their first Top 10 single in the U.K. arrived in 1964, it wasn’t until 1966 and “Look Through Any Window” that they cracked the American Top 40.) While Bus Stop only hit No. 75 on the album charts, it was nonetheless the band’s first American LP to place in the Top 100. Built around the title single, it was otherwise comprised of songs from older albums that hadn’t yet seen release in the U.S., and this mixed bag included covers of Simon and Garfunkel’s “I Am a Rock,” Smokey Robinson and The Miracles’ “Mickey’s Monkey” and Chuck Berry’s “Sweet Little Sixteen.” (Nobody could accuse the Hollies of lacking stylistic variety!) All possessed the trademark Hollies harmonies, with Nash’s high vocal line soaring on “I Am a Rock.” The album also featured songs written by the team of Clarke, Nash and Tony Hicks.  “We’re Through” (the B-side of “Bus Stop”) had an arrangement redolent of Johnny Rivers’ “Secret Agent Man” but a sound that was pure Hollies, while “Oriental Sadness” was another distinct composition marked by Nash's dynamic and already recognizable vocals.

Don't Stop! Stop! Stop! now. Hit the jump to continue with details on that classic album, plus pre-order information and track listing for BGO's two-fer!

Bus Stop’s follow-up was Stop! Stop! Stop!, named after the No. 7-charting single penned by the prolific Clarke/Nash/Hicks team (like “Bus Stop,” it climbed to No. 2 in the U.K.). This mini-drama with its fun story is still memorable today for its unique, insistent banjo accompaniment and sparkling harmonies. In addition, Stop! Stop! Stop! included “Pay You Back with Interest,” a more modest hit reaching No. 28. Most significantly, this was the first LP entirely written by the Clarke/Hicks/Nash team, and the first LP to have the same track listing in both the U.S. and U.K., where it was released under the title For Certain Because with different cover artwork.

While Stop! Stop! Stop! had a number of adventurous musical textures, the band would take another leap forward with its follow-up, Evolution. This LP’s American release, however, would be the Hollies’ first for the Epic label, and like Imperial before it, Epic reworked the original British track listing for American consumption, adding the hit, steel drum-driven single “Carrie Anne” to the Evolution lineup. The group would embrace psychedelia more fully with 1967’s Butterfly (released in altered form in the U.S. as King Midas in Reverse/Dear Eloise, an awkward and uninspired title if there ever was one!) but this would be the final album with Graham Nash, who departed for American pastures and superstardom. Nash didn’t return until a 1983 one-off LP, other band members including Allan Clarke came and went over the years, and Hicks and Elliott carry the Hollies torch today. The Rock and Roll Hall of Fame induction concert on March 15, 2010 showed that Nash and Clarke could still conjure up their classic sound together.

Combining two albums of the Hollies’ best work, Bus Stop/Stop! Stop! Stop! is due for release from BGO on February 7.  It’s not yet known whether these albums will be presented in stereo or mono. It can be pre-ordered here.