"Elvis is Back" is Back 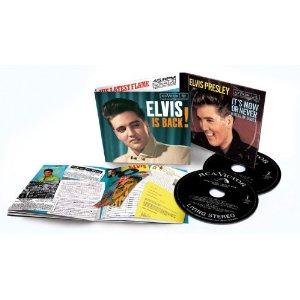 Elvis Presley's Elvis is Back!, it was previously reported, will be released as a Legacy Edition on March 1. We now have a track list to go with that title.

The two-disc set will combine Elvis is Back!, Presley's 1960 LP and the first the King recorded after returning from the Army, with Something for Everyone, an album from the following year. Each will be expanded with relevant non-LP single sides, some of which rank highly in Elvis' discography ("Are You Lonesome Tonight?," "It's Now or Never" and "(Marie's the Name) His Latest Flame."

Read the track list after the jump and order your copy here.

Disc 1: Elvis is Back! and bonus tracks

Disc 2: Something for Everyone and bonus tracks