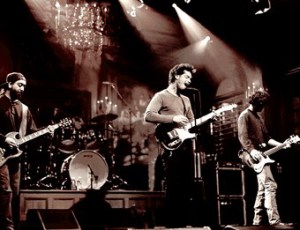 Recently-reunited grunge rockers Soundgarden did well with last year's Telephantasm compilation, which shipped platinum thanks to being included with every copy of the latest Guitar Hero game. Now, the band is going back to the vaults to release their first live album.

Live on I-5 consists of 17 performances taken from the band's final tour, in support of 1996's Down on the Upside. (True to its name, all the performances were taken from venues along the West Coast, near the band's native Seattle.) Happily, the track list (available, as always, after the jump) looks to devote equal attention to hits and lesser-known album cuts, not to mention covers of The Beatles and The Stooges.

The disc comes out on March 22 and can be ordered here.