From "Walter Mitty" to "Inner City": Masterworks Broadway Reissues Due 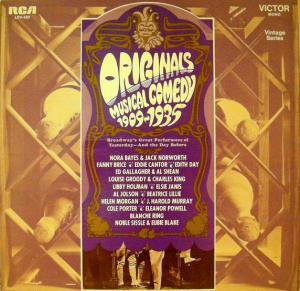 Sony’s Masterworks Broadway division continues its dig through the vaults of the Columbia and RCA Records labels with three new titles, to be released as CD-Rs exclusively through Arkiv Music or as digital downloads.

Today, January 18, sees the reissue of Originals – Musical Comedy 1909-1935, an RCA compilation dating from 1968. This collection remains one of the best ever to anthologize the sound of musical comedy in its earliest days, and is a “Who’s Who” of that golden era. The vaudeville period is represented by some of its all-time biggest stars, among them Al Jolson, Eddie “Banjo Eyes” Cantor, Fanny Brice, and the team of Ed Gallagher and Al Shean. Also heard are the legendary Helen Morgan, who immortalized “Bill” in 1927’s original production of Show Boat, and Beatrice Lillie, the British comedienne whose remarkable career continued well into the second half of the century. Composers and lyricists include George M. Cohan, Arthur Schwartz and Howard Dietz, Jerome Kern and Oscar Hammerstein II, and Cole Porter, who is heard singing his own “You’re the Top” from 1934's Anything Goes, which is being revived this season on Broadway.

On February 15, Columbia’s 1964 Off-Broadway Cast Recording of The Secret Life of Walter Mitty receives its first reissue. The score was composed by the team of Earl Shuman and Leon Carr, perhaps best known for Eddie Holman’s hit “Hey There, Lonely Girl” (originally recorded by Ruby and the Romantics as “Hey There, Lonely Boy”) and Tom Jones’ “Without Love (There is Nothing)” and “The Young New Mexican Puppeteer.” It was based on James Thurber’s 1939 short story, which in turn was adapted into a beloved film starring Danny Kaye in 1947. The tale of the daydreaming Walter Mitty resonated with readers, and even today is the renowned author’s most famous work. The Secret Life of Walter Mitty played for 96 performances off-Broadway at New York’s Players Theatre, and the original cast as heard on the recording included Marc London, Cathryn Damon (television’s Soap), Lorraine Serabian (Zorba) and a young Rue McClanahan! Nina Simone and Liza Minnelli both recorded one of the standout songs, “Marriage is for Old Folks.”

One month later on March 15, the 1971 Broadway Cast Recording of Inner City gets the Masterworks Broadway/Arkiv reissue treatment. The musical billed as “a street cantata” opened at the Ethel Barrymore Theatre on December 19, 1971 where it played a total of 97 performances. Its breakout star, Linda Hopkins, took home both Drama Desk and Tony Awards for her incendiary performance. Directed by Tom O’Horgan, who had previously taken Broadway by storm with his radically original stagings of Hair and Jesus Christ Superstar, Inner City featured a score by Helen Miller and Eve Merriam. Miller was the Brill Building tunesmith behind such songs as Gene Pitney’s “It Hurts to Be in Love” and the Shirelles’ “Foolish Little Girl,” both written with Neil Sedaka’s frequent lyricist, Howard Greenfield. Merriam, a poet, wrote the musical’s source material, the ironic and controversial book Inner City Mother Goose. An Associate Producer of Inner City also went on to later fame: Harvey Milk, the San Francisco political icon who was tragically murdered in 1978.

Hit the jump for pre-order information and discographical information!

Originals – Musical Comedy 1909-1935 can be pre-ordered here on CD-R, and MP3s can be obtained here. Pre-order links are not yet active for The Secret Life of Walter Mitty or Inner City; both will be available later directly from Arkiv Music.