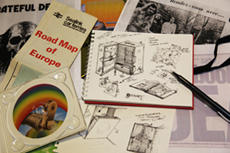 In its newest issue, Rolling Stone reports a box is coming from Rhino that will chronicle The Dead's European tour of 1972 in its entirety, all from original 16-track recordings. It's going to be 60 discs of 22 shows, in their entirety, unedited and bursting at the seams with liner notes and other bonus material. (This tour has been previously anthologized on the overdubbed Warner Bros. triple album Europe '72 (1972), the four-disc Arista box Steppin' Out: England '72 (2002) and Rhino's Rockin' the Rhein with The Grateful Dead (2004).)

Now, the set is available for pre-order through the band's Web site. But there is sort of a catch. "This individually numbered boxed set will be limited to orders placed with a maximum of 7,200 boxes produced. As a special bonus, the first 3,000 orders will receive a personalized copy," the site says. "Due to the huge manufacturing costs...we need to hit 3,000 sales before we even go into production." So make plans for this $450 set soon if you're a fan.

The box will be due in September. Order it here and hit the jump to see the gigs that will be captured in the set.