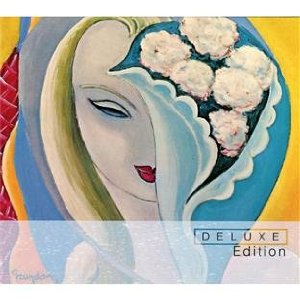 Prepare to be on your knees: details have been released for UMe's upcoming 40th anniversary editions of Derek & The Dominos' Layla and Other Assorted Love Songs, due out March 8.

The result of a searing, bluesy collaboration between Eric Clapton, members of Delaney & Bonnie's touring outfit and Duane Allman, Layla was a critical success but sold only moderately until the title track shot to the Top 10 some two years after the album was released. It became a multigenerational hit in the 1990s when the original recording was featured in the film Goodfellas (1990) and Clapton reworked the tune for his MTV Unplugged acoustic performance in 1992.

The album was previously remixed and reissued in 1990 with two discs of bonus material, but how does this new edition stack up against that set? Hit the jump to find out! The Layla Sessions box set included a disc of jams and another CD of outtakes. Only one of those outtakes, "Mean Old World," is duplicated on the new deluxe edition. The bonus disc kicks off with some genuine rarities, namely both sides of a rare non-LP single produced by Phil Spector and the band's complete performance on The Johnny Cash Show from November 1970 (featuring guest appearances from Cash and Carl Perkins on Perkins' own "Matchbox"). The rest of the disc is devoted to sessions from the group's aborted second LP, nearly all of which were previously released on the iconic Crossroads box set back in 1988. (Those outtakes are newly remixed for this box set.)

The super-deluxe box adds another set of nice treats for fans: the album on double vinyl, a DVD featuring 5.1 surround remixes of the album (plus "Mean Old World"), and another two discs encapsulating the band's stand at The Fillmore East in the fall of 1970. (The original double album from these dates, 1973's In Concert, form the groundwork for this part of the set, and each disc is augmented with four bonus songs first released on Live at The Fillmore, a 1994 live set that took different performances from those concerts.) The whole set will be housed in a box featuring pop-up artwork, reproduced swag and a new hardcover book.

The confusingly-worded press release issued through Clapton's official site also mentions "digital exclusive" and iTunes LP versions, along with a single release of the bonus track "Got to Get Better in a Little While" through digital retailers and on 7" vinyl (perhaps a Record Store Day treat?), with "Layla" as a B-side. (It also mentions a "treasure trove of music and video performances;" details for the latter of which have yet to be revealed.)

Pre-order links are available for the remaster on CD and vinyl, the double-disc edition and the super-deluxe box.