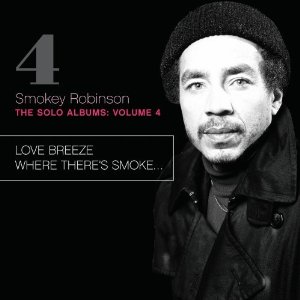 (UPDATE 1/26: This set is now available to order direct from Hip-o Select.)

Usually, the first place to hear about Hip-o Select titles is through Hip-o Select themselves. They keep a semi-frequent newsletter and an active Twitter feed which usually gets the links out to their new reissues and box sets.

It’s strange, then, that there hasn’t yet been a peep about their forthcoming installment in the long-running The Solo Albums two-fers from Smokey Robinson. Meanwhile, Amazon has put up a full track list, something which rarely happens before Hip-o gets theirs up.

The fourth volume in the successful series collates Smokey’s last two studio LPs of the 1970s: Love Breeze (1978) and Where There’s Smoke… (1979). The latter of the two was Robinson’s first Top 40 album since 1975’s A Quiet Storm, thanks largely to the delightful “Cruisin’,” which would be the singer’s highest-charting solo single at the time, peaking at No. 4. (It earned the adoration of a new generation in 2000, when it was covered by Huey Lewis and Gwyneth Paltrow for the largely forgettable film Duets.)

A bonus track will also be included in the form of an instrumental version of “Get Ready,” a tune Smokey wrote for The Temptations in 1966. It appeared on the 12″ single of the song in 1979. (UPDATE: We just got off the phone with Motown reissue guru Harry Weinger, who confirmed that The Solo Albums Volume 5 is going to be Smokin’.)

The Solo Albums Volume 4 is out February 15, per Amazon. View the track list after the jump.