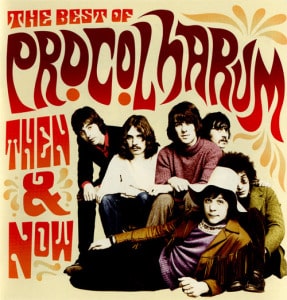 While Salvo Music has gotten a lot of coverage on The Second Disc for expanded reissues of ZTT artists and Madness, there's more to the U.K. label than that. Salvo produced an impressive run of reissues for U.K. prog group Procol Harum in 2009, which were expanded with B-sides and alternate takes from the vault. (Most notably, alternate stereo versions of tracks from the band's self-titled debut were found - the first time those songs were ever heard in true stereo.)

Next week, Salvo continues their successful campaign of Procol Harum releases with a single-disc compilation of the band's greatest hits. Then & Now: The Best of Procol Harum features at least one track from each album the band released between 1967 and 1977 - including single-only tracks "Homburg" and the band's enduring "A Whiter Shade of Pale" - as well as two previously unreleased live tracks recorded in Europe in 2009.

The set is due in U.K. shops on February 15. The official order page from Salvo is here, while the track list is after the jump.