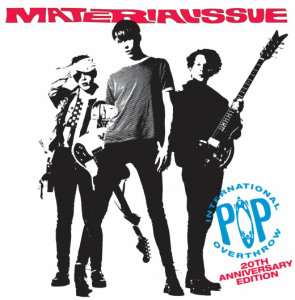 Every now and then one wonders what Hip-o Select has to offer outside of the Motown and Verve canon. Not that the volumes of catalogue gold coming from the fine producers and compilers devoted to those genres are overkill - quite the opposite - but it would be nice to see other acts in the Universal roster receive the Select treatment.

That's what makes the news of a reissue from short-lived power-pop band Material Issue such a delight. The Chicago band only released a small handful of LPs, EPs and singles before lead singer Jim Ellison took his own life in 1996. And despite several singles in the upper reaches of the Billboard Mainstream Rock charts and a power-pop festival posthumously named for their debut album, the band are still arguably not given the acclaim they deserve.

Hip-o Select will attempt to rectify this in April with a 20th anniversary reissue of the album. In addition to remastering the 14-track LP, eight bonus tracks will be included. Six of them appeared on a promotional-only album (the other tracks from that disc, which do not appear on this reissue, are an acoustic take on "Diane" and a live version of "Valerie Loves Me"), one ("Sixteen Tambourines") ended up on a college-radio sampler and another ("The Girl with the Saddest Eyes") looks to have been previously unreleased.

All in all, it looks like a pretty worthwhile set, and it will be available on April 5. (No pre-order link is live from Select just yet, but we can credit our friends at Slicing Up Eyeballs with the track list, viewable after the jump.)