Joan Baez to Reissue “Play Me Backwards” With Additional Tracks 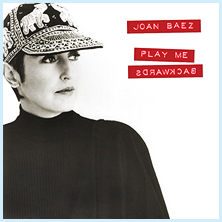 Joan Baez recently announced the reissue of her 1992 album Play Me Backwards as a nicely expanded set – but you’ll have to pony up if you want it in the States.

Play Me Backwards marked a lot of firsts for the folk singer: her first album in Nashville since Come from the Shadows (1972), her first of many collaborations with songwriters/producers Kenny Greenberg and Wally Wilson, her main collaborators for most of the 1990s and her first music video, for the track “Stones in the Road.” The album was a considerable success in its own right, earning a Grammy nomination for Best Contemporary Folk Recording.

But it turns out there was more to the record, as this new edition from Proper Records suggests. The set will be expanded with no less than 10 previously unreleased demos, including “Seven Curses,” a long-unreleased song written by Bob Dylan. (His own demo was only recently released!) It will also feature new artwork and a new essay by Arthur Levy.

Now here’s the rub: Proper will only release the CD in the U.K. and Europe, so you’ll have to import the disc if you want a copy. However, another label, Diverse Records, will release the expanded set as a 180-gram double LP that will be available in all territories. The sets are out March 14, and you can see the track list after the jump.