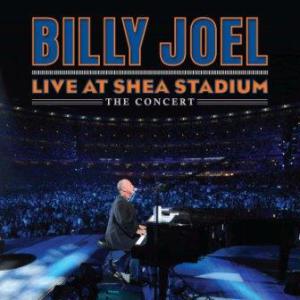 One of the biggest pitfalls as a music writer is reading something - usually a review - that spells out your thoughts so well that you have no idea where to go with your own piece. Popdose editor-in-chief Jeff Giles did that alarmingly well with his scathing assessment of Billy Joel's Live at Shea Stadium: The Concert (Columbia/Legacy 88697 85424-2, 2011), calling it "pungently shitty, the nadir of a relatively distinguished career, and the type of release that justifies the awful music business tradition of referring to albums as 'product.'”

Now, it's not for me to say how right he is - Giles has been a Joel fan far longer than I have - but I tend to agree with him, to an extent. Live at Shea Stadium is far closer to the relatively toothless Концерт, taken from the Piano Man's 1987 tour of the Soviet Union, than the essential Songs in the Attic (1981) or the surprisingly fiery 12 Gardens Live (2006). But I tend to think that's the point; Billy Joel essentially has nothing left to prove, and thus has no reason to let it all hang out on tour. And yet, that's precisely what he did five years ago, in a series of concerts to promote a box set.

Maybe my opinion is influenced by personal perspective - I was present at the twelfth Madison Square Garden show in the winter of 2006, and saw Joel spin through some of my personal favorite deep cuts - but I was not present for the Shea shows on July 16 and 18, 2008. (I know several who were, though, including our own Joe Marchese.) 12 Gardens Live was a tacit admission of age, what with Joel transposing nearly every song down a key, but both the selection and the delivery of those tunes was almost an atonement for not releasing a pop record since the early '90s, for falling back on his haunches in a miasma of Elton John tours, classical records, Broadway shows and drunk driving.

And yet, here we are years later, on the eve of another planned catalogue expansion, and I can't help but bite a nail or two in nervous anticipation knowing that Live at Shea Stadium isn't a reaffirmation of Joel's sterling, late-period live reputation but a document, a victory lap meant to appease casual fans and concert attendees. The set is heavy on both hits and lesser-known sides - "Piano Man," "She's Always a Woman," "Keeping the Faith" and "The River of Dreams" sit alongside "Zanzibar," "The Ballad of Billy the Kid" and "Summer, Highland Falls" - and stuffed to the gills with guests (Tony Bennett, Garth Brooks, Paul McCartney, John Mayer and Steven Tyler chief among them); on those criteria alone, it should be a pretty decent set.

But it's not, and Joel himself is to blame. His vocal performance is lazy to the point of insult - he seems to be mocking Bennett on "New York State of Mind" and he sneers "Get a pre-nup!" to a man who proposes to his girlfriend during "She's Always a Woman" - and he seems to have checked himself out of the show by the end of Disc 2. "Piano Man" is largely carried by the audience, and - in what may be the most egregious error on the set - Joel and McCartney sing different lyrics at one point while harmonizing on "Let It Be." And that's just what you hear on the two CDs; watching the DVD is perhaps even more painful, with Joel looking tired and bloated. (In fairness, he has since had double-hip replacement surgery and looks a little better.)

While Live at Shea Stadium may not be the pre-reissue burst of excitement we've been waiting for (and indeed, no forthcoming product is teased inside this package), the separately released documentary covering the same event, The Last Play at Shea (Lionsgate 29584, 2011) does a pretty good job of filling that void. The secret to its success is the film's downplaying of the performance itself, focusing instead on Billy's career and the evolution of Shea. It's shockingly easy to draw the parallels between Joel and the New York Mets, but the appeal for music fans is a rare look at the beginning of his career, a topic too rarely explored in any medium. The Shea plot threads are compelling even to non-sports fans (like myself); one of the neater anecdotes revolves around a groundskeeper who worked on both Joel's shows as well as the historic performance by The Beatles at the same venue in 1965.

We still don't know what's going to appear on the forthcoming Billy Joel reissues, but I'm not as hostile to the probability of vintage live shows as I once was, if only to wash the taste of Live at Shea Stadium from my palate. I'm not sorry it exists - it's certainly a worthy souvenir for people who were there, and it's probably the last nail in the coffin of the idea of Joel as late-period sad sack - but it's not something I think I'm going to keep  coming back to when it comes to the Piano Man live.