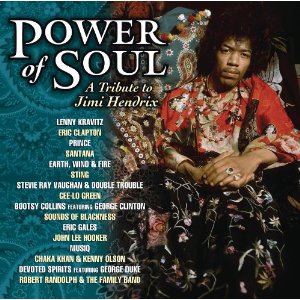 Mark your calendars, Hendrix fans: another batch of Experience Hendrix/Legacy reissues are coming your way.

Next month, Legacy will reissue three more titles in the Hendrix catalogue. The first is South Saturn Delta, a 1997 outtakes compilation first released during Experience Hendrix’s partnership with MCA. That set, which featured plenty of sought-after outtakes in a more official context, will be pressed onto compact disc as well as vinyl. Then there’s a DVD reissue of Hendrix’s January 1, 1970 performance at New York’s Fillmore East with Band of Gypsys. This set, which won a Grammy in 1999, was famously captured on record in 1970 and was added to the EH/Legacy catalogue last year in Europe. The DVD includes a 5.1 surround sound mix by Eddie Kramer, Hendrix’s engineer, and interviews with famous fans and band members.

The most exciting release, though, has to be the out-of-print tribute album Power of Soul: A Tribute to Jimi Hendrix. Originally released in 2004, the set features new and old covers of Hendrix’s tunes from a diverse group of acts, including Sting, Prince, Cee-Lo Green, Santana and Stevie Ray Vaughan and Double Trouble.

There are also some Record Store Day goodies to expect from Experience Hendrix, as outlined in this press release. While all of the titles have been previously released, it’s nice to see them all back in print. They’re out April 12, and more info can be found after the jump.

Includes footage of the following tracks: