This Was the Sea: Waterboys to Release Vintage Demos 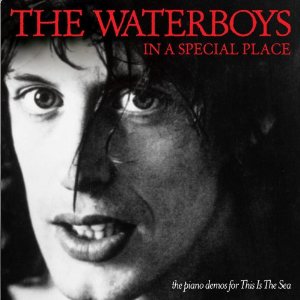 Here's another something we can share that Slicing Up Eyeballs expertly bought to our attention: a collection of demos from Scottish rock group The Waterboys.

Considered the early forbearers of the "Big Music" sound - a style that would become synonymous with the band's first three albums and would describe other bands like Big Country, The Alarm and Simple Minds - The Waterboys, led by Mike Scott, achieved some of their greatest success with This is the Sea in 1985. Bolstered by the popular single "The Whole of the Moon" (which would peak at No. 3 in 1991 in the U.K.), This is the Sea marks the apex of the "Big Music" era, before Scott began to pursue more folk-oriented styles and dissolve the band in the 1990s (and reuniting them in 2000).

While This is the Sea was expanded with a bonus disc of B-sides and outtakes in 2004, In a Special Place provides more material from the era that's never appeared in any format: 15 demos from the sessions, including early versions of "Don't Bang the Drum," "The Whole of the Moon," "Old England" and the title track. It's pretty neat to see this come out on a major label outside of being packed in with another reissue of the record. And it'll be out on April 15.

As always, pre-order links and track listings are after the jump.