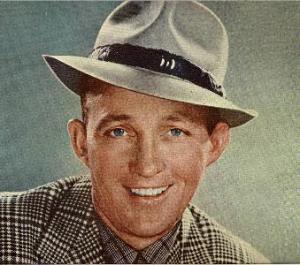 With the Collector's Choice Music label in a state of flux and no new releases on the horizon, disappointment is in the air. One of the most acclaimed series created at Collector's Choice in recent years is The Bing Crosby Archive. With the cooperation of Crosby's family and access to his personal collection, executive producer Gordon Anderson spearheaded a deluxe series of expanded reissues restoring the legendary artist's album catalogue to print. While no formal announcement has been made by Joe Van Horn, Anderson's successor at Collector's Choice, the label (and series) remains dormant.

Fans of Crosby aren't totally out in the cold, however. The singer's fans know that he has an extensive library of over 2,000 commercially released songs, not to mention innumerable radio and television performances. British label Sepia has announced the latest volume of its comprehensive Through the Years series, Volume 7, produced in cooperation with the International Club Crosby. Through the Years is a continuation of Jonzo Records' series The Chronological Bing Crosby, which totalled a whopping 51 volumes! Those 51 discs anthologized every commercial master released by Crosby between 1926 and the fall of 1950, and Sepia picked up the line in 2008, spanning the end of 1950 and part of 1951. Volume 7, due for release on May 10, covers 1954, primarily the album A Musical Autobiography recorded for Decca.

That isn't all. It's unknown whether The Bing Crosby Archive will continue on Collector's Choice, but the series is currently offering two digital-only collections exclusively available on iTunes, With All My Heart and Shall We Dance? Hit the jump for information on these releases, as well as the new Sepia volume, including complete track listings with discographical annotation!

A Musical Autobiography was Decca's 1954 tribute to its biggest star. This extensive package (which was available as 5 LPs or 17 45-RPM EPs) contained 49 re-recordings and 40 original tracks, all revisiting Crosby's long tenure with the label. He supplied special between-track commentary for the project, making this set truly one of the earliest career-spanning box sets! Sepia's single disc does not include all of this set, as it collects Crosby's recordings by original session date. Most of the sessions between April and June 1954 were for A Musical Autobiography, but others represented on Through the Years Volume 7 include dates for a pair of songs from Paramount's film White Christmas and a handful of single cuts.

Over in the digital domain, both With All My Heart and Shall We Dance? are drawn from Crosby's original radio recordings, most of which have been meticulously preserved in the family archive. (The quality of the material on the Collector's Choice CDs is often stunning for material of this age.) With All My Heart offers 15 previously unreleased performances from a number of the crooner's 1950s radio programs: The Bing Crosby Show for Chesterfield, The Bing Crosby Show for General Electric, The Bing Crosby Show, The Ford Road Show and The Crosby- Clooney Show. There is also one track from an early television special (Cole Porter's "I Love Paris") and a digital video of that "Paris" performance from 1954.

Shall We Dance? rounds up 15 more tracks, 14 of which are previously unreleased. This compilation is derived from two of the 1950s radio programs (The Bing Crosby Show for General Electric and The Ford Road Show), one track from the rare 1968 retrospective The Songs I Love, and one from a television broadcast in 1962. There's also a video of Crosby performing the oddity "Doin' the Bing" from that 1962 special.

Both digital albums feature many performances of songs not usually associated with Crosby, making them a particular treat for collectors. With All My Heart finds Bing taking on two Johnny Mathis classics, "Misty" and "Chances Are," and two popularized by Perry Como, "Magic Moments" and "Catch a Falling Star." (Alas, CD releases would be even better!)  With All My Heart and Shall We Dance? are available now through iTunes; Through the Years Volume 7 will hit stores on May 7. A pre-order link can be found at Amazon U.K. here.

All songs listed by matrix number, title and composer/lyricist(s).

Bing Crosby, With All My Heart (HLC Properties/Beach Road Music, 2011, digital only, no cat. no.)

All tracks are previously unreleased.

Bing Crosby, Shall We Dance? (HLC Properties/Beach Road Music, 2011, digital only, no cat. no.)