He's Got What It Takes: Marv Johnson's Motown Years Coming from Kent 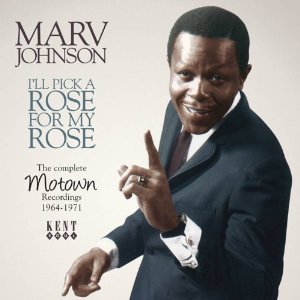 Had Marv Johnson (1938-1993) accomplished nothing else, he would still go down in history as the first artist heard on a Motown single. The very first release to come out of Berry Gordy's mighty empire in January 1959, Tamla 101, was Johnson's "Come to Me" b/w "Whisper," both sides of which were written by Gordy and the artist. Thankfully, Johnson did accomplish much more musically, and as a testament to his legacy, Ace's Kent label will release I'll Pick a Rose for My Rose: The Complete Marv Johnson at Motown 1964-1971 as part of its ongoing series of releases in association with Motown.

While Gordy's enterprise wasn't yet ready for prime time, Johnson certainly was. After the single took off locally, Gordy leased it to United Artists for national distribution. Johnson stayed with UA, and Gordy produced his follow-up singles, most notably 1960's Top Ten hit "You Got What It Takes." But with this inauspicious debut, a classic sound was born. Eddie Willis and Joe Messina, two members of the Funk Brothers guitar section, played on "Come to Me," as did James Jamerson (bass) and Benny Benjamin (drums) of that classic aggregation. In the background were the Rayber Voices, including Robert Bateman, the renowned songwriter Brian Holland and Raynoma Liles, Berry's second wife.

Johnson remained with UA until 1964. When Berry Gordy became too busy with his own business to work with Johnson for a rival label, the singer was paired with top names like Jerry Leiber and Mike Stoller, and Bert Berns. Upon release from his UA contract in April 1964, Johnson signed directly with Motown. This is where Kent's compilation picks up Marvelous Marv's story. The 1965 single "Why Do You Want to Let Me Go" b/w "I'm Not a Plaything" was Johnson's first Motown release upon his return to the company, this time on the Gordy imprint. The A-side was actually a Berry Gordy song previously recorded at UA by Eddie Holland!

1966's "I Miss You Baby (How I Miss You)" b/w "Just the Way You Are" went Top 40 R&B and would be his final U.S. chart placing. Clarence Paul and Luvel Broadnax wrote the A-side while Johnson contributed his own B-side, a sophisticated track with an arrangement and string line right out of the New York soul playbook. Johnson's next 45 for the company would be his last. 1968's "I'll Pick a Rose for My Rose" was paired with "You Got the Love I Love," and while it didn't make an impression on our shores, the reaction was quite the opposite in the U.K. where it went Top Ten early in 1969. It was so successful there that Tamla's British arm built an entire LP around "Rose" containing both sides of the single and a number of tracks unreleased in America. (For Kent's CD release, the original LP has been remastered from the original stereo tapes used by Tamla Motown U.K.)  James Dean and William Weatherspoon wrote "Rose" with Johnson, while "You Got the Love" was co-written by Marv and Johnny Allen, a prominent arranger who was the orchestrator of Isaac Hayes' "Theme from Shaft." Hit the jump for more on Marv, plus full track listing and discography!

Kent's anthology represents the complete Motown recordings of Marv Johnson other than that initial single, Tamla 101; hence, the "1964-1971" appended to the album title. In addition to the six single sides mentioned above, Kent's collection includes the entire British LP, five entirely unreleased tracks mastered from the original Motown tapes and four cuts initially issued via the Cellarful of Motown series.