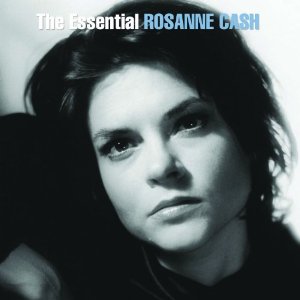 It’s no small feat to become a success in the music business, but it may be an even greater accomplishment when your father is a legend. While the cachet of a famous last name may provide entrée into the industry, only a major, singular voice can maintain a long career. The number of such successes is small, but an undoubted member of the elite club is Rosanne Cash. Like Nancy Sinatra and Natalie Cole, Cash has defied the odds to become a living legend herself, and produced a body of work deservedly evaluated on its own merits, not just as music from the daughter of Johnny Cash. Legacy will celebrate her outstanding career on May 24 with the release of The Essential Rosanne Cash, a comprehensive two-CD anthology drawing on albums from Cash’s 1978 Ariola debut, a Germany-only release, through her most recent album for Manhattan/EMI, 2010’s The List.

The numbers speak for themselves when describing that 32-year period. The daughter of Johnny Cash and his first wife Vivian Liberto, Rosanne Cash charted twenty-two country singles under her own name while at Columbia Records between 1979 and 1995, seventeen of which appear on The Essential. All eleven of Cash’s chart toppers, including the triumvirate from 1981’s Seven Year Ache and her 1989 cover of The Beatles’ “I Don’t Want to Spoil the Party,” are compiled for the first time on one set. The Grammy Award-winning “I Don’t Know Why You Want Me” from 1985 is included, as well as the unprecedented four number ones in 1987 and 1988 from King’s Record Shop. The Essential also features duets with Vince Gill and Rodney Crowell, Cash's husband from 1979 to 1992 and the producer or co-producer of her first five Columbia albums.

Disc One and the first half of Disc Two are largely devoted to those Columbia golden years, and the second half of Disc Two turns the spotlight on Cash’s most recent label affiliation with Capitol/Manhattan/EMI. Produced by Cash herself and Gregg Geller, The Essential Rosanne Cash takes us through her last, acclaimed release to date, The List, which drew its track selections from a list of 100 essential American standards given to Rosanne by her father. Bruce Springsteen appears on Paul Hampton and Hal David’s “Sea of Heartbreak” (best known from Don Gibson’s 1961 recording) and Nickel Creek’s Chris Thile joins Cash for a version of Mickey Newbury’s “Sweet Memories,” formerly available only on the Borders exclusive edition of The List. Johnny Cash himself appears on a duet track from 2002, “September When It Comes.”

Packed with 36 career-spanning songs and a striking cover photograph, The Essential Rosanne Cash arrives from Legacy on May 24. Rodney Crowell has contributed new liner notes for this release. Hit the jump for the complete track listing with a pre-order link plus discographical and chart information!