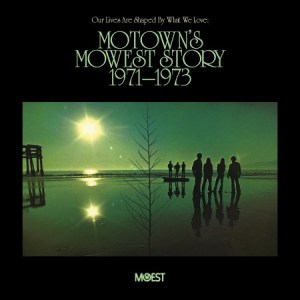 The sound is familiar but different.  The harmony is spellbinding if a bit woozy.  You've only given me a flower/I wish I had the whole bouquet... The track, led by acoustic guitar and gently funky percussion, is spare and raw.  If I should ask you for an hour/Is there a chance that you would stay/And maybe spend the day?  The falsetto is recognizable but eerily haunting.  The song is "You're A Song (That I Can't Sing)" performed by Frankie Valli and the Four Seasons for the album Chameleon, the group's first effort at Mowest.  It signaled a change in direction for the famed "Jersey Boys" when they crossed the country to sign with Motown's new California-based label Mowest.  Neither the Seasons' tenure nor the Mowest label itself would endure, but between 1971 and 1973, Mowest released roughly ten albums and nearly fifty singles.  The cream of the crop has been collected by Light in the Attic's masters of musical esoterica on the delicious Our Lives Are Shaped By What We Love: Motown's Mowest Story 1971-1973 (LITA 064, 2011).

The 16-track anthology takes its title (and evocative cover image) from a 1972 effort by Odyssey, a band with no relation to the disco hitmakers of "Native New Yorker."  Donnie Dacus, later a member of Chicago, played guitar alongside Don Peake for the multi-ethnic band fronted by lead vocalist Royce Jones and singer/multi-instrumentalist Kathleen Warren.  No fewer than three tracks are excerpted from Odyssey's first and only album.  Odyssey's tracks are melodic and soulful, but the band had a unique sound thanks to Warren's vibraphone, C.L. Robert James' flute and the male/female vocal blend.  Songs like "Battened Ships" are hopeful, bright and exciting.  Odyssey eked out an entire album before Donnie Dacus' exit hastened the end of the band; The Nu Page only managed one single, but its B-side is present here and how lucky we are!  "A Heart is a House" is, simply, the best 5th Dimension song never recorded by the 5th Dimension.  Marilyn McLeod sounds like a sister of Marilyn McCoo (in actuality, she was Alice Coltrane's sister!) with her luscious vocal floating over a Gene Page orchestral arrangement.  This smooth soul offering was produced by Berry Gordy's brother Robert and was ready-made for the airwaves.  How this song managed to stay hidden for almost 40 years is a real Motown mystery.

Syreeta, formerly Rita Wright, was one artist who was moved to Mowest from Detroit.  The sweet and seductive "I Love Every Little Thing About You" was written and produced by her ex-husband Stevie Wonder as her first Mowest single.  Syreeta's 1968 debut single for the Gordy label, Ashford and Simpson's "I Can't Give Back the Love I Feel For You," is heard here in a rendition by Suzee Ikeda, Motown's first Asian-American talent and later a prominent personality behind the scenes at the company.  Ikeda's take on the song is charming and confident but it didn't lead to a sustained recording career.

Despite the promise of the California sun that graced the Mowest logo, it wasn't all sweetness and light. Rock and funk sit comfortably alongside pop and soul on Motown's Mowest Story signifying the parent company's attempt to not impose a strict genre guideline on its newly signed artists.

Willie Hutch and Hal Davis were behind the driving funk of "Act Like a Shotgun" performed by G.C. Cameron, formerly of The Spinners.  When his fellow group members decamped for Atlantic under the auspices of Thom Bell, Cameron stayed on board with the Detroit empire and signed to Mowest.  His first solo single A-side, "Shotgun" is heated and forceful if not in the timeless league of the work The Spinners went on to produce at Atlantic.  Gene Page again was the arranger, showcasing a very different sound than on the champagne soul of The Nu Page!  On the rock side, there's a hint of Badfinger in the vocal sound of Lodi, a New Jersey group born out of the remains of The Knickerbockers (the British Invasion-esque Nuggets classic "Lies").  The optimistic rock of "I Hope I See It In My Lifetime" was one side of Lodi's only single, and the band also had the honor of recording the first Mowest long player.  Both, sadly, met with no commercial success.

A couple of acts got their Motown starts at Mowest before reaching that elusive success on the parent label.  The Commodores are represented by "Don't You Be Worried," a 1973 track that shows a group still searching for its signature sound.  Thelma Houston came to Mowest after the artistic success of Sunshower, her Jimmy Webb-produced record for Dunhill, but she didn't hit her commercial stride until 1977's disco-fied Gamble and Huff cover, "Don't Leave Me This Way."  Pamela Sawyer and Gloria Jones' "I Ain't Going Nowhere," as heard here, is a quintessential Motor City groove.

Motown's Mowest Story is illuminating from start to finish, making available a number of difficult-to-find tracks.  With Hip-o Select's The Complete Motown Singles still stalled just one year, or two volumes, shy of its completion, these rare 1970s cuts are more desirable than ever.  Only a handful of the artists represented have seen their work anthologized.  The Sisters Love, a gritty girl group represented here by "Give Me Your Love" and "You've Got to Make the Choice," recently saw their unissued album appear on CD courtesy of Reel Music.  Hip-o Select's 2008 The Motown Years collected Frankie Valli and the Four Seasons' entire released output at Mowest and the three tracks included here by producers Kevin "Sipreano" Howes and Matt Sullivan are a fine sampler.  The best of the trio is the psychedelic "The Night," a Northern Soul favorite with a mesmerizing beat and stunning production from its writer, Bob Gaudio.  (While at Mowest, the Seasons also collaborated with The Corporation, Hal Davis and Willie Hutch, among others.)  Perhaps the diversity of styles was one factor in Mowest's never finding its own identity, but it makes for listening that's never uninteresting.

The 28-page booklet features an illuminating essay by Howes that puts the label's formation into historical perspective, something of a specialty for Light in the Attic.  It's copiously illustrated in full color with photographs plus album cover and label artwork.  Dave Cooley at Elysian Masters has remastered every track from the original tapes with clarity and definition.

Despite the short time the label was in existence, there's more than enough left over for a second volume.  Lesley Gore's Someplace Else Now is a remarkable buried treasure in her deep catalogue, and a track or two would have been welcome.  Others not represented include The Crusaders, Celebration, and Repairs; still more artists had albums prepared for Mowest that eventually were shuffled to the main label.   Most egregiously, Mowest's only hit single (and actually just the second 45 on the imprint!) is absent, Tom Clay's medley of Dick Holler's "Abraham, Martin and John" and Burt Bacharach and Hal David's "What the World Needs Now is Love."  Blending these songs with spoken word samples from John F. Kennedy, Robert F. Kennedy and Dr. Martin Luther King, Jr., the offbeat but impassioned track by former disc jockey Clay went Top 10 in 1971, and it's deserving of a spot on any comprehensive overview of Mowest.

Motown has generously opened its vaults in recent months to labels such as Reel, Ace/Kent and Big Break Records.  With Motown's Mowest Story, Light in the Attic has become a successful addition to these ranks, and one hopes that further such anthologies will follow.  While compilations devoted to The Sound of Young America proliferate, it's all too rare that a label delves into "Another Side of Motown."  I loved every little thing about it!