Welcome to another installment of Reissue Theory, where we focus on notable albums and the reissues they could someday see. As we wish a speedy recovery to one of rock's most beloved sidemen, we present a special look at a rare moment in the spotlight for the Big Man, Clarence Clemons. 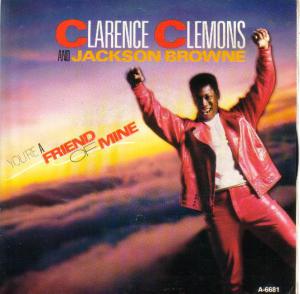 To many, the saxophone is just one of those embellishments that can can spice up a pop song or dull its taste. It's hard to deny, however, the tastiness of a tune garnished with the saxophone work of Clarence Clemons. The Norfolk, VA native has long earned his place in history as the saxophonist for Bruce Springsteen's E Street Band, not to mention session work for living legends like Aretha Franklin, Darlene Love, Janis Ian and The Four Tops. (Clemons recently crossed over into the consciousness of a new generation by contributing to several tracks on Lady Gaga's Born This Way.)

Hearts froze all over the world, then, when it was announced earlier this week that the Big Man had suffered a stroke. Reports place the musician in serious but stable condition, with fans openly invited to send well-wishes his way. Allow us, then, to take a special look back at Clemons' work outside of the E Street Band - namely, the first two solo albums he recorded for CBS Records in the early 1980s.

For rock and roll enthusiasts, it isn't hard to think of Clarence Clemons and say, "you're a friend of mine." He's yours to read about after the jump.Clarence Clemons' meeting with Springsteen has passed into legend. In 1971 the saxophonist, then part of Norman Seldin's Joyful Noize outfit in New Jersey, went to see Bruce Springsteen play at an Asbury Park club, and by his own account made quite an entrance, arriving at the club during a rainstorm which all but tore the door off its hinges. Clemons asked Springsteen to sit in, to which the singer/songwriter quickly agreed - after all, who'd turn down anyone as giant as him?

Clemons' playing really took the sound of the E Street Band to another level, from his solos on "Blinded by the Light," the first track from Bruce's first LP, Greetings from Asbury Park, N.J. (1973) to his scores of riffs on Born to Run (1975), the front cover of which features an iconic shot of Springsteen leaning against Clemons in mid-riff.

Even as Springsteen and his band were poised for some of their greatest commercial successes with Born in the U.S.A. in 1984, Clemons kept busy elsewhere through a pair of albums on his own, that featured his talents not only as saxophonist but proper frontman. The Big Man's solo debut, Rescue, was recorded with his ensemble, The Red Bank Rockers (guitarist David Landau, bassist John Siegler, keyboardist Ralph Schuckett - who also produced - and vocalist John "J.T." Bowen). Springsteen naturally appeared on one track, writing, adding rhythm guitar and producing lead single "Savin' Up."

But Clemons wouldn't have a major hit until after Born in the U.S.A., with follow-up album Hero. Sporting a far poppier sound from producers like Arthur Baker and Narada Michael Walden, Hero yielded one considerable hit in "You're a Friend of Mine," an upbeat R&B track featuring Clemons and Jackson Browne in a duet. "Friend" hit No. 18 on the Billboard charts and featured a heavily-played video clip co-starring Browne's then-girlfriend, Darryl Hannah (who contributed backing vocals to the track), as well as Walden on the drum kit.

Rescue and Hero received a two-fer CD release several years back on the Collectables label, but our hypothetical reissue splits each album on two discs in order to make room for two non-LP B-sides that appeared on singles with each album.