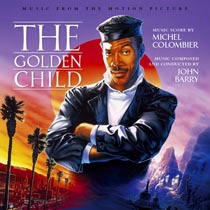 La-La Land's newest title, a three-disc expansion of The Chosen One, is ready to order.

By now you already know the story behind this new release (a sort-of fake-out following La-La Land's scheduling shift ahead of Comic-Con), so it's worth noting instead the kind of music we're dealing with on this set. Barry's epic, James Bond-esque score was largely rejected by the producers for Michel Colombier's atmospheric, synth-heavy score. But elements of Barry's work did figure into the movie, not only in terms of instrumentals but in the form of "The Best Man in the World," a pop song he co-wrote for Ann Wilson of Heart to sing. Some of both composers' material ended up on the original Capitol Records soundtrack LP, alongside pop and rock tracks by Ratt, Ashford & Simpson, Marlon Jackson(?!) and Martha Davis of The Motels.

Not only does the new set restore all of both orchestral scores on CD for the first time, but it also includes all of those LP tracks, as well as another Barry-penned pop tune (sung by fellow film composer Randy Edelman!) and the instrumental version of "The Best Man in the World" that appeared on the B-side of the eventual single release. If you know someone who's a superfan of this movie (I'm sure they're out there), this looks like a must have.

The set, limited to 5,000 copies and featuring extensive liner notes by Jon Burlingame, is yours to order after the jump.