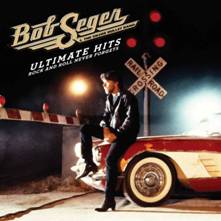 As if getting some of Bob Seger's albums back on CD wasn't exciting enough this year, a new double-disc compilation puts some of his greatest hits (and a few rarities) back on shelves, where they belong.

Ultimate Hits: Rock and Roll Never Forgets, boasts 26 tracks of Bob Seger on his own, with The Silver Bullet Band and - most exciting of all - with The Bob Seger System. The original mono single version of "Ramblin' Gamblin' Man" will feature on this set alongside classics like "Old Time Rock and Roll," "Night Moves," "Like a Rock," "Still the Same" and "Shakedown."

Additional rarities and new tracks include Seger and The Silver Bullet Band's take on "Little Drummer Boy" from 1987's A Very Special Christmas, a new cover of Little Richard's "Hey, Hey, Hey, Hey" (subtitled "Going Back to Birmingham") and an unreleased version of Tom Waits' "Downtown Train," recorded in 1989 but shelved to avoid competition with Rod Stewart's hit version.

The 66-year-old rocker is still going strong, wrapping up a successful tour later this year and writing material for a new album in 2012. Until then, Ultimate Hits is out November 21, and the track list is after the jump.