Dreams Stay With You: Big Country's Debut to Be Expanded With Archival Demos 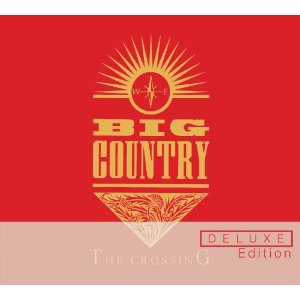 It looks like we've got the first deluxe edition of 2012 locked down - at least across the pond. Scottish band Big Country today announced the details for a new expansion of their fantastic debut, The Crossing, to coincide with a 30th anniversary tour across the United Kingdom. (The band reunited first in 2007 and again in 2010, both times with new vocalist Mike Peters of The Alarm, replacing late lead singer/guitarist Stuart Adamson, who died in 2001.)

Released in 1983, The Crossing was a killer first album for the Scottish band, thanks to a clutch of fantastic, almost theatric folk-infused rockers from the collective pen of the group (Adamson, guitarist Bruce Watson, bassist Tony Butler and drummer Mark Brzezicki), Watson and Adamson's rich landscape of guitar tones and the production of one Steve Lillywhite, who applied the same magic to The Crossing that he did on the first three albums by an ambitious, guitar-driven band from Ireland named U2.

With a healthy following, both fans and sales-wise, it's not hard to see why Universal is rolling out a double-disc edition of the album. (It's actually the third CD reissue of the record, following a U.K. expansion in 1996 that added four B-sides and a U.S. re-release in 2002 which featured the alternate version of "Chance" released as a single and the entirety of the 1984 EP Wonderland.) This double-disc release features all seven of the non-LP B-sides from the singles released from The Crossing, as well as a bonus disc of demos, ten of which are being released for the first time. (Of particular interest to longtime fans is a trio of four-track demos from 1981 and four demos produced by Chris Thomas, noted producer for The Sex Pistols, The Pretenders and INXS, who helmed the band's debut single, "Harvest Home.")

The package will be out January 30, days before the band's Crossing the Country tour kicks off in England. Hit the jump to pre-order your copy on Amazon and see the track list (as generously bestowed upon the world by Slicing Up Eyeballs).