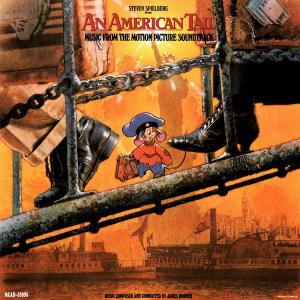 Let’s get the opinions out of the way: An American Tail is not a great movie. I’m not even sure it’s a good movie; I probably wouldn’t even be writing this had it not been an early childhood favorite. But while the film doesn’t quite pan out as a cohesive piece of work, there are some great parts – an interesting approach to plot and animation, and certainly a brilliant batch of soundtrack writing – that make the film worth writing about.

The thing you have to remember about An American Tail, released 25 years ago during the holiday season of 1986, was that the animated flick didn’t have much in the way of direct competition. Disney was three years away from their stunning reinvention as a pop-art animation studio, having most recently released The Great Mouse Detective months earlier. Adding insult to injury – at least for Disney – was the fact that the director was Don Bluth, an ex-Disney animator who had enjoyed some success with The Secret of NIMH (1983) and the laserdisc-based video game Dragon’s Lair (1983).

The story, however, is the kind of classic family yarn you’d expect from the film’s producer, Steven Spielberg. It’s the story of a family of Russian Jews who move to America, and the son, Fievel (named for Spielberg’s grandfather), who gets separated from the family before arriving at Ellis Island and has an adventure trying to find them. Of course, it’s an animated movie, so the family is made up of mice (the Mousekewitz family), but the fine-tuned pathos, not to mention a genuine interest in maintaining a modicum of accuracy to the real-life uphill climb of immigrants in America, is palpable when you watch this movie as an adult.

Part of the fun of An American Tail is its musical sensibilities, both in orchestral score and the four Disney-esque musical numbers peppered throughout the film. Anticipating the trend of classic Disney soundtracks from the likes of Alan Menken and Howard Ashman (renowned for their offbeat Broadway-pop tunes in Little Shop of Horrors) in the late ’80s and early ’90s, the production team recruited rising composer James Horner to provide the musical score, and paired him with legendary songwriting duo Barry Mann and Cynthia Weil for the numbers “There Are No Cats in America,” “A Duo,” “Never Say Never” and “Somewhere Out There.” The work as a whole brims with hummable themes, from the mournful, Eastern European-flavored violin solo representing the plight of the Mouskewitzes to the multi-national pastiche of “There Are No Cats,” where various immigrants justify their risky travel to the New World.

But the film’s signature song, the yearning “Somewhere Out There” (sung in the film by Fievel and his sister Tanya, neither of whom realize they’re both in the same city), was a surprise to even Mann and Weil. The composers stated in interviews that there was no pressure to write a hit single, and were in fact surprised when Spielberg suggested that “Somewhere Out There” would have crossover potential. A version uniting Linda Ronstadt and James Ingram and produced by Peter Asher was recorded and indeed became a smash, peaking at No. 2 in the U.S. and winning Song of the Year at the 30th Grammy Awards in 1988. (It lost both Oscar and Golden Globes to Berlin’s “Take My Breath Away” from Top Gun.)

After the jump, check out the soundtrack’s release history and read about the music to the sequel!

A 45 RPM single (MCA 52973) included the pop version of “Somewhere Out There” and its instrumental. Beyond the initial release on LP, cassette and CD (the latter of which is still in print), no reissue has ever been discussed. (Much of the score is on the album, and any additional material would be easy to release, as the score was recorded by The London Symphony Orchestra and therefore not subject to the usual American Federation of Musicians re-use fees.) 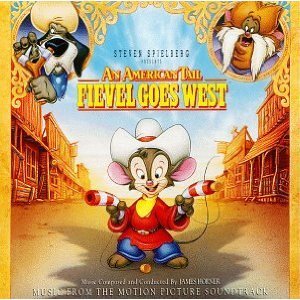 Five years later, a sequel, An American Tail: Fievel Goes West, was released. (Don Bluth, who had made the first of many, many films in The Land Before Time series for Universal in 1988, broke ties with the studio and jumped ship to MGM, making All Dogs Go to Heaven in 1989.) This time, the Mousekewitz family is attracted by a benevolent feline, Cat R. Waul (voiced by the hysterical John Cleese), to escape the hustle and bustle of New York City for the storybook Western town Green River. Again, Fievel embarks on misadventures with his best friend, the timid cat Tiger (Dom DeLuise), and his idol, the courageous if over-the-hill hound Sheriff Wylie Burp (James Stewart, in his final film role), in saving the West from Cat R. Waul’s sneaky gang.

James Horner returned to score the film, but lyrics for the three new songs (“Way Out West,” “The Girl You Left Behind” and “Dreams to Dream”) were penned by Will Jennings, known for his work with Steve Winwood (Back in the High Life) and Eric Clapton (“Tears in Heaven”). (Horner and Jennings would team up a few times, most successfully on Titanic‘s inescapable love theme, “My Heart Will Go On.”) “Dreams to Dream” was anticipated to have pop success, and Linda Ronstadt returned to record a pop version, but lightning did not strike twice.

It should be noted, however, that for a children’s film, the score is wildly ambitious. Aside from the many homages (Horner detractors would go further than “homages”) to Aaron Copland in the Western motifs, there’s a lot of tasteful repetition of the original themes written five years prior. “Dreams to Dream,” in a brilliant stroke, is actually based on the orchestral theme written for Tanya in the last movie.

Unlike An American Tail, the Fievel Goes West soundtrack has long been out of print, and for a children’s title, commands higher-than-expected prices on the secondary market (upwards of $30 for a single CD).