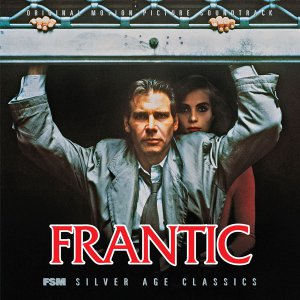 It's a new year, and with that new year comes the knowledge that Film Score Monthly is getting closer and closer to its final release sometime this spring. But before you get frantic about that, enjoy their latest title, released last week: the soundtrack to Frantic.

The 1988 Roman Polanski film featured Harrison Ford as an American doctor in Paris whose wife suddenly disappears from their hotel. His against-all-odds search for her - without the aid of the skeptical French government or U.S. embassy - takes him to the dark side of France, with only a streetwise girl as his reluctant guide through the seedy, terroristic underbelly of the country.

Ennio Morricone's score was lauded by critics, adding greatly to the suspenseful mood of the film as well as its dark, romantic yearning. But the soundtrack album, while a respective offering of music, utilized alternate and concertized arrangements of the themes rather than what was actually heard in the movie. (There was also one non-LP track by British blue-eyed soul band Simply Red, "I'm Gonna Lose You," included on the album.)

Now, FSM offers fans both the remastered soundtrack LP and 12 bonus cues that provide nearly the entire score as heard in the film. (One track is cited in the label's order page as an alternate, but it is not stated which one.) The score, mastered from the remaining source - three and four-track 35 mm dubbing elements - gives a fresh spin on this underrated gem in Morricone's catalogue. And, best of all, it's an unlimited release, giving as many fans as possible the chance to get a copy.

You can order Frantic at the link above and hit the jump for a full track breakdown.