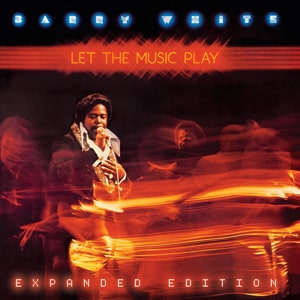 Hip-o Select turns its focus away from Motown for some more satin soul from the inimitable Barry White, with a nicely-expanded release of his 1976 LP Let the Music Play.

By the time the title track from the album - an underrated plea for music to soothe the pain of a lost love over some of the lushest strings from The Love Unlimited Orchestra - was released as a single in late 1975, White was virtually his own brand. He'd recently come off a triplet of Top 10 singles in 1974 and 1975 with the dazzling "Can't Get Enough of Your Love, Babe," "You're the First, the Last, My Everything" and "What Am I Gonna Do with You," and would enjoy platinum sales of his first greatest hits record in '75.

Although Let the Music Play lacked a distinct pop hit single - the title track hit No. 4 on the R&B charts, and follow-ups "You See the Trouble with Me" (co-written by guitarist Ray Parker, Jr.) and "Baby, We Better Try to Get It Together" were modest-to-very-good tunes on the same chart - it's been unfairly overlooked as a whole until recently, with the retooling of "Let the Music Play" as a European dancehall cut in 2000 and the discovery of some great alternate material for the song on the great BW box set Unlimited in 2009.

In fact, Hip-o Select's remastered and expanded edition of the album features five bonus versions of that very song, including the aforementioned Funkstar Deluxe Mix from 2000, the alternate version, both sides of the original single (an edit and an instrumental) and a new mix by longtime Select collaborator John Morales, reimagining the tune as a vintage 12" single version.

Let the Music Play is available to order now and will start shipping around February 3. It hits stores, appropriately enough, this Valentine's Day, February 14. Hit the jump to check out the full specs!