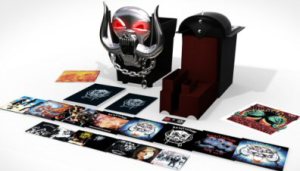 Add another name to the super-deluxe-box set pile in 2012: Motörhead. London’s biggest badasses, through Sanctuary Records in the U.K., are prepping a 16-disc collector’s set – one that’s heavy on artifice, if not necessarily revelatory in terms of content.

The Complete Early Years features CDs of all the band’s major releases from 1977 to 1984, from their iconic albums (Motörhead (1977), Overkill (1979), Bomber (1979), Ace of Spades (1980), the live No Sleep ‘Til Hammersmith (1981), Iron Fist (1982) and Another Perfect Day (1983)) to a handful of non-LP singles and EPs and 1984’s No Remorse double-disc compilation. All reports have touted the set as a CD and vinyl box set, and while it’s unclear as to what will be featured on the latter format, the package photo shows what looks like a 7″ single amid the CDs (in wallet-style slipcases) and extra swag. The icing on the cake for fans is likely the package itself: a massive replica of the band’s iconic “War-Pig” logo.

Unfortunately, it seems the only audience the set exists for are new, extremely curious fans with deep pockets. All of these albums have been previously reissued with not only all the non-LP content contained herein but additional B-sides and live and studio vault material, making the set far from complete. And with a jaw-dropping price tag – $617.41 on Amazon, with no sign of the set on Amazon’s U.K. pages – one could argue you’d have to be as crazy as band frontman Lemmy Kilmister to snap up a copy.

Whatever your take, the box is to be released on February 21, and you can view its contents after the jump.

UPDATE: Much like Elvis Costello, Motörhead frontman Lemmy Kilmister has spoken out against the price of the box. “Unfortunately greed once again rears its yapping head,” the singer said in a statement. “I would advise against it even for the most rabid completists!”