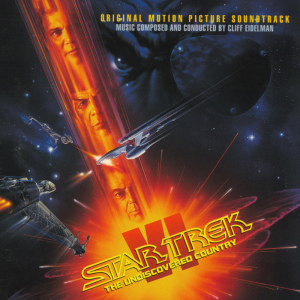 First up, it's an unlimited, expanded pressing of Cliff Eidelman's score to Star Trek VI: The Undiscovered Country. The sixth Trek film has several notable "lasts" to its credit: the last to feature the original series' cast its entirety (1995's Generations and the 2009 series reboot featured several of the major players), the second and last film in the series by Star Trek II: The Wrath of Khan director Nicholas Meyer and the last Trek project series creator Gene Roddenberry saw to completion (he died days after viewing a pre-release assembly of the film).

The film presents an unthinkable event: the Klingon Empire, affected by a major ecological disaster, brokers an uneasy truce with the Federation. Kirk, Spock and the crew of the Enterprise discover a plot to unravel the secret peace talks, and race against time to stop the traitors. Eidelman's dark, dramatic score marks one of the most interesting departures for the series, and this double-disc set presents both the complete original film score, with two alternate cues and two cues composed for the film's theatrical trailers (Trek VI is the only film in the series to have music written exclusively for a trailer), as well as a remaster of the original soundtrack album.

But there's more - an Arthurian adaptation with an interesting score history is also after the jump!

The poem Sir Gawain and the Green Knight, the tale of a knight of King Arthur's court and his fantastical adventures, has existed since at least the 14th century. Astoundingly, it was only in 1973 that an adaptation was made for the screen. Murray Head (yes, that Murray Head) starred as Sir Gawain and Stephen Weeks directed; Weeks would re-adapt the material 11 years later as Sword of the Valiant with Miles O'Keefe and Sean Connery as the title characters.

Composer Ron Goodwin (whose scores include Where Eagles Dare, Alfred Hitchcock's Frenzy and Disney's cult classic One of Our Dinosaurs is Missing) contributed a score that lived up to the adventurous and occasionally mystical tone of the film (a central motif includes four ominous notes for the Green Knight). What's interesting, though, is that he would end up rescoring much of his own work in post-production, meaning almost two complete scores exist on this double-disc set, all remastered from the original source tapes.

Order your copies at the links below!