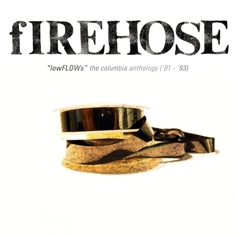 California alt-rock legends fIREHOSE are reuniting for a tour this spring, and to celebrate, Legacy is releasing their last two albums on one set with rare and unreleased bonus tracks.

fIREHOSE was the musical progression for bassist/singer Mike Watt and drummer George Hurley of The Minutemen, after that band's guitarist and longtime friend, D. Boon, was killed in a car accident in 1986. Watt and Hurley were all but ready to cease playing altogether, but were convinced otherwise by an unlikely source: a 21-year-old fan named Ed Crawford, who'd made a pilgrimage to meet the duo from his native Ohio to the band's native San Pedro district of Los Angeles. Crawford's enthusiasm inspired Watt and Hurley profoundly, and they formed a new ensemble with the young man (taking their name from one of Bob Dylan's cards in the "Subterranean Homesick Blues" promo clip).

After three records on the independent SST label and a successful spot opening for their friends Sonic Youth on tour, fIREHOSE were signed to Columbia Records, where their final albums, 1991's Flyin' the Flannel and 1993's Mr. Machinery Operator, were released. With A-list production from Paul Q. Kolderie (who's produced LPs for Radiohead, The Lemonheads, Uncle Tupelo and Hole) on Flannel and Dinosaur Jr.'s J. Mascis on Machinery, both albums deserve a reappraisal in the greater context of the hardcore punk scene in the days before grunge broke through to the mainstream.

And with "lowFLOWS": The Columbia Anthology '91-'93, the band is poised to do just that. The double-disc set features both of the band's final albums expanded with promo-only single mixes, live material, non-LP tracks and four unreleased recordings.

The set is out on April 3, two days before the band kicks off a 16-day reunion tour that culminates with an appearance at the Coachella Music and Arts Festival in Indio, California on the 20th. Hit the jump to make it yours and check out the track list.