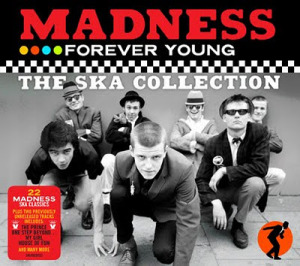 Madness' "Our House" is just one of those songs that's impossible to forget. From that opening hook to the singalong chorus, you can recognize "Our House" from a mile away - even if you don't know Madness was, first and foremost, a ska outfit.

And if you didn't know that, there's a new compilation coming from Salvo Records to fill in the gaps for you. Forever Young: The Ska Collection focuses on the tunes that made Madness a staple of the 2 Tone movement in the late 1970s as well as the tracks that pay homage to those roots in the present day.

The London septet, along with bands like The Beat and The Specials, were cornerstones of the 2 Tone ska movement, which combined elements of ska along with traditional reggae, punk and New Wave. The band's first single, U.K. Top 20 hit "The Prince," was in fact released on 2 Tone Records, founded by The Specials' Jerry Dammers.

In addition to featuring singles and album cuts from their Stiff Records discography from 1979's One Step Beyond... to 1984's Keep Moving, as well as subsequent studio albums Wonderful (1999) and The Liberty of Norton Folgate (2009), the compilation includes two previously unreleased covers: one of Jimmy Cliff's "Vietnam," and a version of Edvard Grieg's classical "In the Hall of the Mountain King" recorded during The Dangermen Sessions, Vol. 1 in 2004.

This is, of course, the latest in a long line of catalogue activity for Madness from USM/Salvo, including reissues and a box set over the past few years.

The new disc, which also features a fold-out poster and new interviews with saxophonist Lee Thompson and guitarist Chris "Chrissy Boy" Foreman, is out on April 2. A pre-order link and track list follow after the jump.