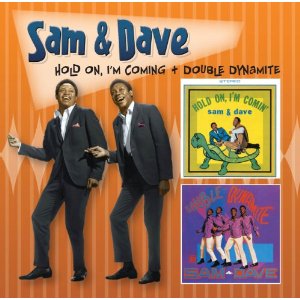 Next to Aretha Franklin, they were the most successful R&B act of the '60s. They were two of the most prominent architects of the iconic Stax sound. And their success can be traced back to the most fortuitous bathroom break in history. Next week, U.K. reissue label Edsel will honor the discography of Sam Moore and Dave Prater - known simply as Sam & Dave - with a pair of reissues that collates just about their entire Stax/Atlantic tenure.

Moore and Prater were gospel-raised singers who met on the club circuit in the early '60s. From the beginning, their R&B works - a mixture of church-inspired call-and-response with the grooves of Sam Cooke and Jackie Wilson - were something special. In the summer of 1964, after regional success on Roulette Records and other labels, Jerry Wexler signed the duo to Atlantic Records. However, the mogul promptly loaned them to Memphis-based Stax Records, which Atlantic distributed, believing their fiery style would be best suited for the rousing session players on the label (including house band Booker T. & The MG's, horn section The Mar-Keys and producers Jim Stewart, Isaac Hayes and David Porter).

Sam & Dave's third Stax single, "You Don't Know Like I Know," was their first of 10 consecutive Top 20 R&B singles. But their fourth single, "Hold On, I'm Comin'," would bring them near-unprecedented pop crossover success. Legend has it Hayes and Porter wrote the song after Hayes called for Prater to come out of the bathroom to continue recording. Prater's response became the iconic, controversial title. (Stax quickly re-pressed the single, changing the title to "Hold On, I'm A-Comin'" to dilute any sexual innuendo.)

The duo followed up with an impressive array of singles, including the sublime "When Something is Wrong with My Baby," the No. 2 pop hit "Soul Man" (later spun into a major hit by The Blues Brothers, the Stax-influenced alter egos of Saturday Night Live stars John Belushi and Dan Aykroyd) and "I Thank You." Three of the group's four Stax/Atlantic albums were Top 10 on the R&B charts. (There would be more singles for Atlantic through 1972 and one more proper studio album for Sam & Dave on United Artists in 1975; they would split up in 1981.)

Edsel's two new titles, available on March 26 in the U.K., combine two albums apiece with plenty of bonus material. The first set, Hold On, I'm Comin' & Double Dynamite...Plus, combines those first two LPs for Stax with three non-LP sides. While almost all of the albums are presented in stereo, "You Don't Know Like I Know" will be presented in its original mono mix with more unique overdubs.

Then there's the two-disc Soul Men & I Thank You...Plus, a two-disc set featuring the duo's last Stax and Atlantic LPs, four non-LP singles (including "I Can't Stand Up for Falling Down," later a hit for Elvis Costello & The Attractions in 1980) and one B-side. Both sets feature new liner notes by writer Tony Rounce and, together, make for an essential cornerstone of your soul music collection.

Hit the jump to check everything out!

Disc 2: I Thank You and bonus tracks