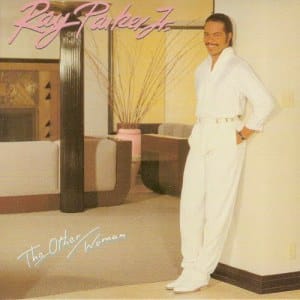 If you’ve watched the critically-acclaimed TV One series Unsung, which acts as a more in-depth Where Are They Now?/Behind the Music-type program for R&B artists including Alexander O’Neal, Sheila E., DeBarge and Atlantic Starr, you know that Ray Parker, Jr. is far more than just the man behind the iconic theme to “Ghostbusters.”

The singer/songwriter/producer/guitarist has a ridiculously long list of great session and production work, and managed to walk away from the major labels before he was pushed out due to age or declining commercial fortunes. Based on interviews conducted on the show, he actually seems like a really nice guy who is both happy with his past successes and where he is in the present.

Now, thanks to the efforts of Funky Town Grooves, you can enhance the revelations of the Unsung episode with some musical education. Four of Parker’s albums, including two with his band Raydio, are being remastered and expanded for a May release.

After the jump, check out what’s coming from the label, and the bonus tracks that abound!

Raydio, an ensemble that featured Parker, bassist Jerry Knight and vocalists Vincent Bonham and Arnell Carmichael, released four albums between 1978 and 1981. Just about each one of them had a major hit, too; their self-titled debut spawned a Top 10 single in “Jack and Jill,” and 1979’s Rock On had another Top 10 in “You Can’t Change That.”

In 1980, on the album Two Places at the Same Time, the band changed their name somewhat to Ray Parker, Jr. & Raydio, to further spotlight their talented frontman. Three Top 40 hits would come from Two Places and final album The Other Woman, including the Top 5 hit “A Woman Needs Love (Just Like You Do).”

A year after Raydio’s dissolution, Parker released The Other Woman, which featured Carmichael as well as longtime Raydio collaborator, drummer Ollie E. Brown. The title track was another Top 5 pop smash, and a Top 20 hit (“I Still Can’t Get Over Loving You”) followed from 1982’s Woman Out of Control.

Each album is augmented with at least one bonus track, in most cases a 12″ remix or single edit. (A Woman Needs Love features edits of the title track and “It’s Your Night” along with a remix of “All in the Way You Get Down” previously unavailable in America, and The Other Woman features extended and instrumental versions of that hit of the same name as well as a non-LP track, “Bad Boy.”) While there’s nary a “Who ya gonna call!” to be heard on these four discs, they provide some much-desired perspective on one of contemporary R&B’s more underrated artists.

Pre-order links and full track lists follow, although each title is not yet in stock – so keep them bookmarked!