Barenaked Rarities Arriving in May 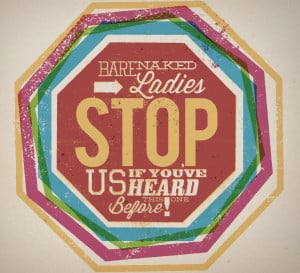 Canadian rockers Barenaked Ladies are releasing a compilation of outtakes and rarities that, fortunately, more or less lives up to the title.

Stop Us If You've Heard This One Before!, a counterpoint to last year's Hits from Yesterday and the Day Before, features 12 tracks, only two of which have ever seen the official light of day. (Those tracks are a remix of megahit "One Week" and "Yes, Yes, Yes," a bonus track on some versions of the band's 2003 album Everything to Everyone.)

The remainder of the album is mostly split between studio outtakes from the mid-2000s, ("I Don't Get It Anymore," "I Can, I Will, I Do," "Long While" and "Second Best" date to the Everything sessions, while "Half a Heart" and "Adrift" ended up re-recorded for 2006's Barenaked Ladies Are Me) and live tracks from the early '90s (including a cover of The Beastie Boys' "Shake Your Rump").

The band, whose last album All in Good Time (2010) was the first without founding member Steven Page, will embark on a summer tour with Blues Traveler, Big Head Todd & The Monsters and Cracker in July and August. Stop Us hits stores on May 8. Hit the jump for the full track breakdown.

Barenaked Ladies, Stop Us If You've Heard This One Before! (Reprise/Rhino, 2012)