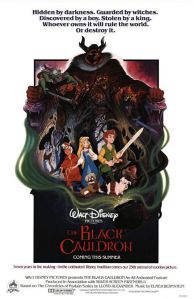 Based on the Welsh mythology-inspired fantasy series The Chronicles of Prydain, Cauldron is the tale of Taran, a young pig-keeper embarks on adventure to save his home from the fearsome Horned King and his armies of the undead. As Joe explained it in our Disney/Intrada wishlist post (by the way, that’s three scores from our post that have now been released!), Cauldron arguably marked the lowest point in Disney feature animation. At the time the most expensive animated film ever made, The Black Cauldron was a costly failure. Audiences stayed away from this dark, intense fantasy which controversially earned the studio its first PG rating ever for an animated film. It collapsed under the weight of its own ambition: Cauldron was the first Disney film since Sleeping Beauty to be shot in 70 mm, boasted the studio’s first-ever use of groundbreaking CGI and boasted advances in surround sound.

One thing the film had going for it, though, was Elmer Bernstein’s sweeping score. The veteran composer lent his typical orchestral flourishes to a score equally inspired by his spate of scores for the sci-fi/fantasy genre, then most recently the off-the-wall soundtrack to Ghostbusters. Perhaps due to the film’s box-office failure, the soundtrack got short shrift on home media: a half-hour of re-recorded cues performed by Bernstein with the Utah Symphony Orchestra was released by Varese Sarabande alongside the film, and re-released on iTunes by Disney in 2007.

Now, though, Intrada presents the complete, original score as heard in the film, remastered from the original elements and produced by Disney soundtrack guru Randy Thornton. It’s 75 minutes of music with a new package featuring liner notes by Jeff Bond and rare behind-the-scenes photos from the film and scoring sessions. It looks to be a hit for Disney fanatics who’ve doubtlessly paid a pretty penny for the original soundtrack LP and CD. Hit the jump to order your copy now!