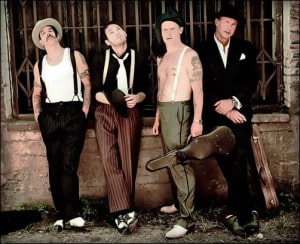 How do the Red Hot Chili Peppers celebrate their graduation to legend status per their recent Rock and Roll Hall of Fame induction? They pay tribute to the ones that came before on a new digital EP that includes a handful of B-sides paying tribute to their favorite fellow inductees.

We Salute You, to be released May 1, includes covers of Dion and The Belmonts, The Ramones, The Stooges, Neil Young, The Beach Boys and David Bowie, all of which can certainly be argued as influences for the long-running funk-rock outfit.  Half of the covers are studio takes, having appeared on CD singles or other compilations (the band's take on The Ramones' "Havana Affair" dates from 2003's We're a Happy Family tribute album, for example). The other half are live tracks, one of which is being released for the first time anywhere. (All but one of these tracks have never appeared in digital format before.)

For those fans that haven't warmed up to new guitarist Josh Klinghoffer, who joined following arguably best-known guitarist John Frusciante's second departure last year, fear not: almost every one of these tracks features the band's innovative axeman. (The cover of Neil Young's "Everybody Knows This is Nowhere" dates from the band's most recent tour last year, while their take on Bowie's "Suffragette City" was released on a CD single during the One Hot Minute era, when Dave Navarro of Jane's Addiction served as guitarist.)

Check out the full track lineup after the jump.