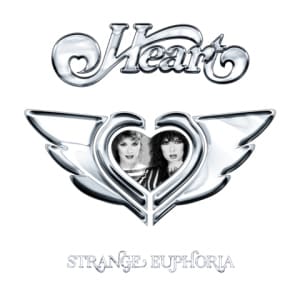 The wait is over for the first-ever career-spanning box set from Heart. Legacy Recordings will release Strange Euphoria, a 3 CD/1 DVD package, in stores on June 5.

The set spans from the early phases of Ann and Nancy Wilson's musical career as members of "The Daybreaks" in 1967 all the way to their latest album, the Top 10 hit Red Velvet Car (2010). Along the way, there are plenty of hits and unreleased material, including demos of killer cuts like "Magic Man" and "Crazy on You," a live version of Barracuda, radio staples from the band's mid-'80s comeback including "Alone," "These Dreams" and "Never" (the latter presented as a live version with a guest appearance by Led Zeppelin's John Paul Jones) and studio and live tracks by '90s side project The Lovemongers. The set also features a 1976 live concert captured on DVD for the first time.

Those who purchase the set through Amazon are in for additional treats in the form of a bonus five-song EP of Led Zeppelin covers. "Heart Zeppish" features run-throughs of "Immigrant Song," "The Battle of Evermore," "Misty Mountain Hop" and more.

Hit the jump to order your copy and preview the track list of Strange Euphoria.