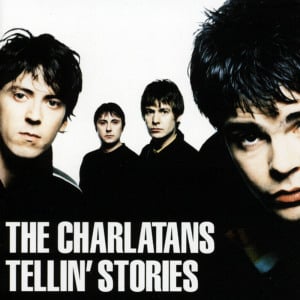 Madchester band The Charlatans (known in America with the redundant appellation "The Charlatans UK") will reissue their 1997 album Tellin' Stories through Beggars Archive this month, for the album's 15th anniversary.

The enduring alt-rock band - who made humorous headlines earlier this year when a joking tweet from frontman Jim Burgess turned into a limited-edition cereal in England - suffered major tragedy during the recording of Stories, with the death of keyboardist Rob Collins in a car crash midway through production. The band pressed on, though, and the results were bountiful: Tellin' Stories was the band's third U.K. chart-topping album, and spun off the band's highest charting singles, Top 5 hits "One to Another" and "North Country Boy" and Top 10 hit "How High."

As the band preps a series of live dates in June to commemorate the album, and with Burgess having named his recent autobiography after the record, Beggars Archive will release limited double-vinyl and double-CD sets (limted to 1,000 and 2,000 copies, respectively), featuring the remastered album with a bonus disc of B-sides, including an unreleased outtake, "Rainbow Chasing." (It would morph into B-side "Don't Need a Gun.")

This set is available May 28, and is yours to preview after the jump.