Made for You and Me: American Legend Woody Guthrie Chronicled in New Box Set 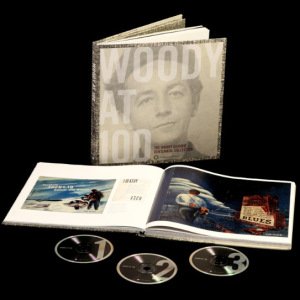 Fewer figures cast a larger shadow in American folk music than Woodrow Wilson Guthrie. The Oklahoman singer/songwriter's contribution to the fabric of our nation's sound is innumerable; from Dylan to Springsteen, any songwriter worth their salt in depicting the life, livelihood and dreams of our country owes Woody Guthrie a strong debt.

With this in mind, Smithsonian Folkways will release a new career-spanning Guthrie box set this summer, in honor of what would have been his 100th birthday.

Woody at 100: The Woody Guthrie Centennial Collection compiles three discs of Guthrie's greatest compositions - "This Land is Your Land," "So Long, It's Been Good to Know You," "Do Re Mi" and more - and includes about a whole disc's worth of material being released for the first time. These include, tantalizingly, four songs recorded for KFVD-FM in Los Angeles in 1939; these recently discovered tracks are believed to be the earliest surviving recordings Guthrie committed to tape.

The discs are housed in a beautiful hardbound case with 150 pages of liner notes bound inside. The whole thing is yours to buy on July 10, four days before the singer's centennial. You can preorder the set on its own or as a bundle with a poster, T-shirt and instant download of the box's contents, right here, where you can also enter your e-mail to receive a free download of unreleased tune "Big City Ways."

As always, the track list is after the jump!