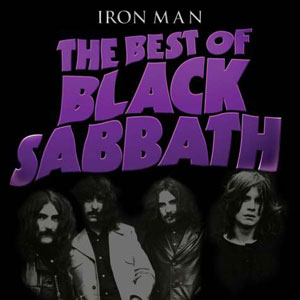 It's been a winding road for Black Sabbath fans, likely anxious over the band's somewhat perilous reunion late last year. Original members Ozzy Osbourne, Tony Iommi, Geezer Butler and Bill Ward announced their plans late last year to tour and release a new album in 2012 - a plan that's been semi-sidelined by Iommi undergoing treatment for lymphoma and contractual disagreements with Ward. Only three dates have been announced for the band this year, including a pair of overseas gigs and a stint at Lollapalooza in August.

That said, Sanctuary, the controller of the band's catalogue in Europe, is planning a modest push for new fans with the release of a new compilation this summer. Iron Man: The Best of Black Sabbath is a 14-track disc featuring material from six of the band's first eight albums, all of which featured Osbourne as lead vocalist.

If you've purchased the many, many releases of the band's back catalogue, there's certainly nothing here you don't already own. But new fans might want to spin "Paranoid," "Iron Man," "Snowblind" and other killer cuts, and they'll have a shiny new disc with which to do so when this appears in shops on June 4.