In Case You Missed It: A Compilation That Can’t Be Kihn-tained 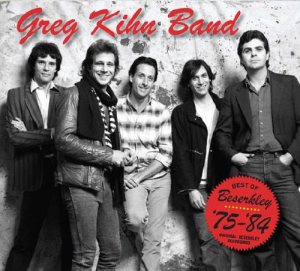 Here’s a compilation that slipped through the cracks a few weeks back: Best of Beserkley ’75-’84, a new disc covering the work of The Greg Kihn Band, for many years the flagship artist of Beserkley Records.

The Berkeley, California-based indie label trafficked in power pop and alt-rock stylings, with early acts including Earth Quake, The Rubinoos and Jonathan Richman and The Modern Lovers. Kihn, a Baltimore-born singer/songwriter living in Berkeley was an early signee, as well; his debut recording was released on the label’s first LP, the audaciously titled Beserkeley Chartbusters Vol. 1.

The Greg Kihn Band stopped putting out records in 1986, a few years after Beserkley folded; Kihn now operates as a radio DJ in San Jose. Rhino issued a compilation of their work in 1989, and other labels have licensed the Beserkley catalogue in the decades since. The Riot label takes the reins on this new disc, which gathers 21 of the band’s best singles and album cuts for a new generation to enjoy.

The set is out now, and can be ordered after the jump.