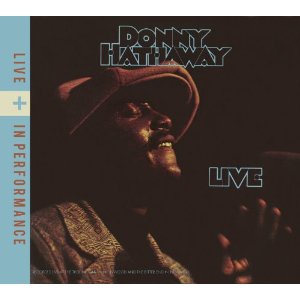 The late, great Donny Hathaway was rather beautifully celebrated by Rhino France some time ago with the release of a career-spanning box set. While U.S. audiences had no such luck with a similar compilation, Shout! Factory is picking up the slack and releasing a two-disc set containing both of the soul legend's long out-of-print live albums.

Hathaway had recorded two sensational studio albums when Live was released in 1972. Very little of those albums are replicated here, save for "The Ghetto" and "Voices Inside (Everything is Everything)," both from his debut disc Everything is Everything in 1970. Much of the material herein are soulful covers, including one recent R&B classic (Marvin Gaye's "What's Going On") and two pop/rock tunes (Carole King's "You've Got a Friend" and John Lennon's "Jealous Guy"). Culled from two live sets on either coast of America (one at Hollywood's famous Troubadour and one in Greenwich Village's Bitter End), Live cracked Billboard's Top 20, earned Hathaway his first gold record and even became a cornerstone for hip-hop artists (key track "Little Ghetto Boy" was sampled by both Dr. Dre and the Wu-Tang Clan).

Read on to learn about In Performance, a fitting postscript to Hathaway's too-short career, and where these albums have been all your life.

By the release of In Performance, Hathaway had tragically died, having taken his own life after years of struggling with depression. Fans and collaborators were heartbroken, and Atlantic Records saw it fit to honor his lasting legacy with another live disc. Sourced from several live shows over the course of 1971 to 1973, In Performance features some of Hathaway's best-loved tunes, including his gorgeous take on Leon Russell's "A Song for You," "To Be Young, Gifted and Black" and "I Love You More Than You'll Ever Know."

Amazingly, this is the premiere domestic CD release for both albums; a 2004 disc from Rhino, These Songs for You Live!, combined seven songs from both albums (four from Live and three from In Performance) and resequenced them alongside seven unreleased live tracks. But on July 17, fans will finally have their chance to own both essential discs in one fell swoop.